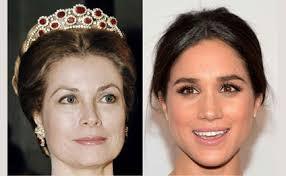 Meghan Markle is not the first American actress to give up her career for the love of a prince. More than six decades ago her fellow countrywoman Grace Kelly walked away from Hollywood to take on a new role as princess of Monaco.

And despite marked differences in the two women's trajectories, royal observers say Markle, like Kelly, could bring a welcome dash of modern flair to a royal family better known for hewing to tradition no matter the cost.

"Meghan Markle is the Grace Kelly of the iPhone generation," said Ana Romera, a monarchy specialist in Spain.

It was a photographer for French society magazine Paris Match who orchestrated Prince Rainier's first meeting with Kelly, muse of Alfred Hitchcock, during the Cannes film festival in 1955.

At 26 years old, Kelly was at the height of her career, having just won an Oscar for her role in "The Country Girl" alongside Bing Crosby.

Less than a year later she had married into royalty: love at first sight for some, a marriage of convenience for others.

But no one doubts that Rainier's union with one of the brightest stars of the silver screen put his domain on the map.

"Grace Kelly gave a spectacular boost to the image of the tiny principality. After the wedding tourists started coming in force, hoping to see the royal couple," said Bertrand Tessier, a French journalist who wrote a book on Kelly.

But the price of this success was the end of Kelly's dreams of continuing to act.

"The prince absolutely did not want his subjects to see his wife kissing another man, even if it was only the movies," Tessier said.

"This was the most dramatic moment of Grace's life. She had been sure she would be able to quickly return but realised it wouldn't happen," he added.

"She had to choose whether to be a princess or an actress, but she couldn't be both."

- 'A new chapter' -History now seems to be repeating itself, but with a few twists.

Markle, who met Harry on a blind date two years ago, has said she will abandon acting to take up humanitarian work.

"It will be a new chapter," said the 36-year-old, who will no longer be part of the hit US law series "Suits" in which she starred for seven seasons.

Despite having struggled for years to break into acting, she may be more willing to move on than Kelly, who starred alongside screen giants like Cary Grant and Clark Gable.

Adelaide de Clermont-Tonnerre, editorial director of French royalty weekly Point de Vue, said Markle's career "has in many ways plateaued, so it's easier to give it all up".

"It's easier to give up your career when you're Meghan Markle than when you're one of the biggest, most beautiful and glamorous stars of your era. Grace Kelly had all of Hollywood at her feet," added Tessier.

He said Kelly "never recovered", suffering from depression in a "golden prison" where she had three children with Rainier before her death in a car accident in 1982.

- Difficult debuts -Kelly was born into a well-off Catholic family in Philadelphia in 1929, her father having secured a fortune in construction.

Markle, by contrast, had a much less stable upbringing.

Born in Los Angeles in 1981, her parents split when she was two and divorced when she was seven. She has remained close with them but become estranged from her older half-siblings.

But neither actress appeared destined for a royal role -- a fact that exposed both to the perils of finding a place in the higher spheres of nobility.

When Kelly arrived in Monaco she found herself rejected by many in high society.

"Everybody was asking what the hell is Grace doing here -- why doesn't the prince marry a Monacan?" said Jeffrey Robinson, a Briton who wrote an authorised biography of the couple.

"We have this idyllic picture of Grace, but the reality is that in the principality she was the victim of fairly offensive comments about the fact she was an actress," agreed de Clermont-Tonnerre.

News of Harry's wedding with Markle, daughter of a white father and black mother, also generated venomous comments, much of it amplified by social media posts.

There were so many sexist and racist tirades that palace officials issued a rare statement blasting the "abuse and harassment" after their relationship was confirmed in November 2016.

"The situation has changed completely since the engagement was announced. There's huge enthusiasm and passion worldwide, perhaps even more so than with William and Kate," de Clermont-Tonnerre said.

"And this union has all the elements of a fairytale: a divorced and mixed-race woman who is transformed into a member of the British royal family. It's fascinating."