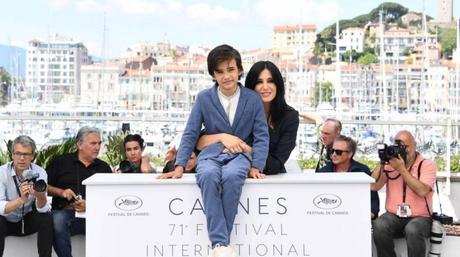 A 13-year-old Syrian refugee boy became the star of the Cannes film festival Friday for his breathtaking performance in a Lebanese film many see as the likely winner of the Palme d'Or top prize.

Zain Al Rafeea, who has been working as a delivery boy in Beirut until recently -- and who has only just learned to write his name -- turns in a performance in "Capernaum" that critics said would melt the hardest of hearts.

"I and the total stranger sitting next to me were sniffling and sharing a packet of tissues" by the end, said the Hollywood Reporter's Leslie Felperin.

And young Zain -- who is small for his age -- endeared himself still further by falling asleep at the press conference Friday afternoon, having stayed up late for the gala premiere the night before.

He said he now wants to be an actor and had been "spoiled" by the crew on the shoot.

Director Nadine Labaki took six months to make the odyssey through lives of the poorest of the poor in the slums of the Lebanese capital using amateur actors.

Zain plays a boy of the same name who runs away from home after his desperate mother and father sell his 11-year-old sister into marriage for a few chickens.

Zain then takes his parents to court for having brought him into the world.

Labaki discovered the girl who plays his sister, Cedra Izam, selling chewing gum in the streets.

But it was Zain's on-screen rapport with an unbearably cute baby Boluwatife Treasure Bankole -- whose real-life Kenyan and Nigerian parents were rounded up during the shoot -- that created the most cinematic magic.

In an astonishing sequence at the heart of the film, the boy is left to look after the breast-fed baby in a shanty town after its mother is picked up and imprisoned by the police.

In real life, the casting director stepped in to look after the infant in the absence of its parents.

"Capernaum" turns on the characters' lack of papers, with Zain's parents too poor to have registered his birth.

"Cinema is one of the most powerful weapons we have to draw attention to problems, it is one of our responsibilities as artists," actor-director Labaki told AFP.

She said she found the idea for the film staring her in the face one night when she was driving home from a party.

"I stopped at a traffic light and saw a child half-asleep in the arms of his mother who was sitting on the tarmac begging.

"It became an obsession for me... I did more than three years of research. I was trying to understand how the system fails these kids," she said.

"These kids are facing extreme neglect. A lot of the things I saw shocked me, children who were incredibly neglected, and I went into children's prisons.

"You feel completely powerless. And that's maybe why we turn away," said Labaki, best-known for her far less gritty beauty parlour story, "Caramel".

"I wanted to be in the head of these kids and understand what happens when you turn away and the kid goes around the corner and disappears."

She said her 13-year-old lead -- who has been working since he was 10 in the Mazraa district -- was lucky to have loving parents. "When we started (shooting) he wasn't going to school and faced a lot of hardships. He's only now just learned to read and write his name. There are thousands of kids in his situation."

Just like his character, Zain told reporters that he would like to live in Europe. And Labaki said there is a chance his refugee family might get asylum in Norway. "His future is uncertain. I hoped the film can give him another horizon," she added.

The child got a 10-minute standing ovation after walking the red carpet for the premiere at Cannes late Thursday.

Critics raved over the film although some complained its storylines were too sprawling. "Prizes are almost a certainty," said Variety.

"Young Rafeea is a revelation as the swaggering, foul-mouthed Zain, combining the requisite traits of wounded sensitivity with seasoned resilience that somehow never feels cliched," said its critic Jay Weissberg.

Since the war in neighbouring Syria broke out, tiny Lebanon has become home to a million Syrian refugees, more than half of whom live in extreme poverty, according to the UN.

With little end in sight to the seven-year civil war, Lebanese patience has been wearing thin, with refugees becoming the scapegoats for many of the country's ills.

Thank you Nadine for all the good you are doing to Lebanon's image, culture, and social justice. Hope your unique and profound talent shines ever brighter.