Are Cracks Emerging in the Russia-Iran Alliance in Syria? 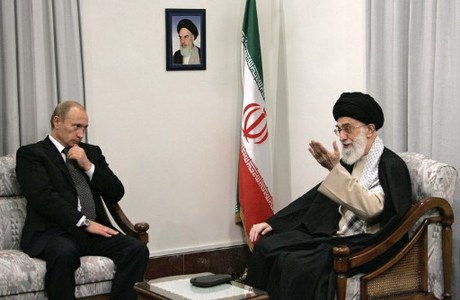 Russia's recent call for foreign forces to leave Syria was seen as a possible turning-point in its tricky alliance with Iran, though analysts say their partnership still has a long way to run.

"With the start of the political process in its most active phase, foreign armed forces will withdraw from Syrian territory," President Vladimir Putin vowed after meeting his Syrian counterpart Bashar al-Assad in Sochi on Friday.

Up to now, the two countries have worked in fairly close tandem, with Russia providing the air power and Iranian forces doing the heavy lifting on the ground.

Henry Rome, Iran researcher for the Eurasia Group in Washington, said Putin's comments were "not game-over in the Russia-Iran alliance in Syria by any means, but it is a pretty serious bump in their road."

Iranian officials reacted testily, with foreign ministry spokesman Bahram Ghasemi telling reporters: "Nobody can force Iran to do something against its will."

Syria's deputy foreign minister tried to defuse the tension on Wednesday, saying the departure of Iran, or its Lebanese ally Hizbullah, was "not even on the agenda for discussion."

But Putin tends to choose his words carefully, and analysts say he was sending a message that the Syrian conflict must not evolve into an even deadlier war between Iran and Israel.

Unnerved by the presence of so many Iranian forces to the north, Israel has launched a series of deadly air raids on Iranian positions in Syria in recent weeks.

Russia is the only power with close ties to both, and seen as crucial to keeping the pot from boiling over.

"The Russians are playing a delicate balancing act between different regional allies," said Julien Barnes-Dacey of the European Council on Foreign Relations.

He said the Russian statement about removing foreign forces was a message to Iran that there would be limits to its influence in Syria.

"But they will have extreme difficulty in enforcing it," he added.

"We've seen a whole series of statements from Russia over the last couple years about an impending drawdown of foreign forces, none of which have materialized."

Iran is deeply entrenched militarily in Syria, and wary of Russia trying to edge it out of the country and reap all the spoils of reconstruction.

"Iran fought a very difficult war -- is still fighting it -- and expects long-term concessions out of that in terms of energy contracts and so on," said Rome.

There has been consternation in Tehran, he said, that Russian and Turkish firms are winning key contracts instead of them, and even more so that Russia appeared to give Israel the green light for its recent air strikes on Iranian positions.

But for all the bad blood, Russia and Iran are still working closely.

Iran relies on Russian air support and anti-aircraft equipment, while Iranian forces and proxies will be crucial to a ground war that is still far from over.

For analysts in Iran, claims of divisions are over-blown, and they insist Iran has no interest in maintaining a long-term presence in Syria.

"Iranians are fine with leaving Syria," said Mohammad Marandi, a political analyst at the University of Tehran.

"They weren't there in the first place and if the Americans and their allies hadn't created this mess in Syria, they wouldn't be there now," he said.

Russian analyst Vladimir Sotnikov said Putin had no interest in damaging the "strategic partnership" with Iran.

"Although Iran is not an easy partner for Russia, the two countries will not break their close ties," he told AFP.

He said Putin's comments about foreign forces referred to countries without clear authorization from Assad, which Iran currently has.

But all analysts agree the major parties are maneuvering for position in the post-war landscape.

"My sense is that Assad won't want to be left with an autonomous military sub-system that reports to Tehran from inside his country," said Barnes-Dacey.

"But the bottom line is that the Iranians are in Syria to stay, with some degree of military presence."

Putin is concerned about the strong western economic pressure and the potential pinch this will leave when the gas line through the Ukraine is pinched shut. Turkey is also placing aces up its sleeve and has no real love for Iran either and Russia will have to comply now that everyone knows its the only power factor in Syria. The US has made it clear it wants no direct involvement in Syria and hence will be utelizing the same policy it employs in Libya. Libya has now returned to being a desert and anarchy is the order of the day and is no longer an international heaven for terror. I predict Syria will face the same future as Libya....anarchy.

The Shia are getting kicked out hahaha!