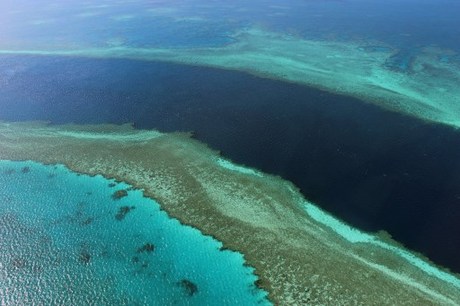 Australia's Great Barrier Reef, under severe stress in a warmer, more acidic ocean, has returned from near-extinction five times in the past 30,000 years, researchers said Monday.

And while this suggests the reef may be more resilient than once thought, it has likely never faced an onslaught quite as severe as today, they added.

"I have grave concerns about the ability of the reef in its current form to survive the pace of change caused by the many current stresses and those projected into the near future," said Jody Webster of the University of Sydney, who co-authored a paper in the journal Nature Geoscience.

In the past, the reef shifted along the sea floor to deal with changes in its environment -- either seaward or landward depending on whether the level of the ocean was rising or falling, the research team found.

Based on fossil data from cores drilled into the ocean floor at 16 sites, they determined the Great Barrier Reef, or GBR for short, was able to migrate between 20 centimeters (7.9 inches) and 1.5 meters per year.

This rate may not be enough to withstand the current barrage of environmental challenges.

The reef "probably has not faced changes in SST (sea surface temperature) and acidification at such a rate," Webster told AFP. Rates of change "are likely much faster now -- and in future projections."

The World Heritage-listed site, which attracts millions of tourists, is reeling from successive bouts of coral bleaching due to warming sea temperatures linked to climate change.

Webster and an international team wanted to view the reef's current plight within a longer-term context.

Over 10 years, they studied how it had responded to changes caused by continental ice sheets expanding and waning over 30 millennia.

Their research covers a period from before the "Last Glacial Maximum" or LGM -- the peak freeze about 21,000 years ago during the last Ice Age.

The average sea level at the time was some 120 meters (394 feet) lower than today.

These were caused by the reef being exposed to air. What remained of it inched seaward to rebound later.

The fifth death event took place about 10,000 years ago, apparently due to a massive sediment dump amidst a higher sea level.

Webster said the GBR "will probably die again in the next few thousand years anyway if it follows its past geological pattern" as Earth is believed to be due for another ice age.

"But whether human-induced climate change will hasten that death remains to be seen."

In April, a study said nearly a third of the reef's coral was killed in a "catastrophic die-off" during a violent heatwave in 2016.

Changes in sea temperature and acidity can cause corals to "bleach" -- ejecting the algae that live in their tissue and provide them with food.

Bleached corals are more susceptible to disease, and without enough time to recover, may disappear for good.

Coral reefs are home to about a quarter of ocean life, and act as nurseries for many species of fish.