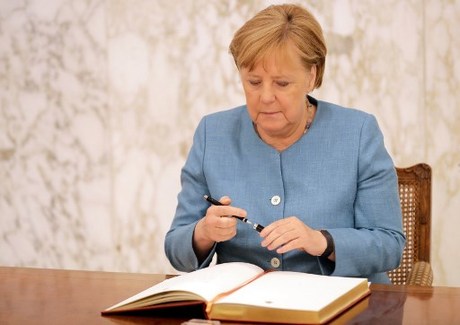 Chancellor Angela Merkel's interior minister offered his resignation late Sunday after his hardline Bavarian conservatives failed to budge her over plans to limit migration into Europe and the Germany.

Here are four things to know about the background to the crisis and what's at stake.

The confrontation is over Merkel's refusal of one item in Interior Minister Horst Seehofer's 63-point so-called "masterplan" for asylum and deportations.

Seehofer wants the right to turn back at Germany's borders asylum seekers already registered in another EU country.

He and his Bavarian CSU party -- a deeply conservative outfit allied for decades with Merkel's center-right CDU -- argue the move would simply implement EU law known as the Dublin regulation.

Merkel fears Germany unilaterally setting up border checks could cause a domino effect across the EU, undermining the Schengen free-movement zone and damaging the economy and political solidarity.

What's more, she has a difficult balancing act to strike between the CDU-CSU alliance and her center-left Social Democratic Party (SPD) coalition partners, who are skeptical of further toughening asylum rules.

- How has disagreement become crisis? -

Refusing to give in, Seehofer set Merkel a deadline of July to find a European solution that matched his demands.

If not, he would defy her by going ahead with his border plans -- likely exploding the governing coalition as the chancellor would be forced to fire him.

She says she achieved exactly what was needed in all-night talks with fellow European Union leaders last Friday and follow-up bilateral deals with 16 countries.

Seehofer disagreed, with the CSU saying that national measures to reduce asylum arrivals were both still needed and explicitly provided for in the text of the EU summit agreement.

- Is this only about migration? -

The CSU has not missed an opportunity to make its resentment of Merkel clear since her 2015 decision to leave Germany's borders open to hundreds of thousands of asylum seekers.

They and right-leaning members of the CDU fear the chancellor has led them too far into the center, leaving space for the emergence of the far-right Alternative for Germany (AfD) which has eaten into the conservative camp's vote.

Pressure from the right is especially acute for the CSU as it faces October regional elections in Bavaria.

Polls suggest it will lose its cherished absolute majority on its home turf.

Meanwhile, German left-wingers and some journalists have argued the CSU is falling victim to "Trumpism" after years in which the country appeared largely immune to the populist forces sweeping other advanced democracies.

CSU sources said early Monday they would make a last-ditch bid for a deal with Merkel later in the day.

Seehofer has vowed to resign if no agreement is reached.

But his departure in itself would do nothing to resolve the conflict.

Bavarian leaders must then decide whether to offer a new interior minister and uphold their alliance with the CDU, or make a definitive break in the partnership.

That would rob Merkel of her majority in parliament, but leave her with several options to continue governing.

Under Germany's constitution, she would remain chancellor until an opposing candidate can command a majority -- unlikely given the diverse opposition parties.

Merkel could attempt a never-before-seen minority government, seek a new coalition partner in the ecologist Greens or pro-business Free Democrats, or orchestrate a no-confidence vote in parliament that could trigger new elections.