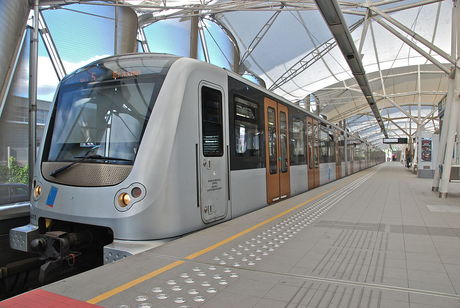 Sleep deprived Belgians were not having a bad dream Wednesday morning: Brussels metros resounded with a French football anthem after Les Bleus qualified for the final of the World Cup.

The STIB transport network in Brussels had lost a bet against its Paris counterpart, the RATP, agreeing to play a 2002 song by French rock hero Johnny Hallyday called "Tous Ensemble", if Belgium lost to France in Tuesday's semi-final.

With its chorus "We are champions, we are all together, go the Blues", and the recognizable voice of Hallyday, the anthem was played twice across the metro system during rush hour, said Francoise Ledune, spokeswoman for STIB.

Belgium's road to humiliation began Monday on Twitter when the RATP account doctored a photo of the Brussels metro station Herrmann-Debroux and renamed it "Griez-Herr-Mann-debroux" in honor of the French player Antoine Griezmann.

A STIB riposte proposed to rename the Parisian metro station Saint-Lazare "Saint-Hazard", named after the captain of the Red Devils, Eden Hazard.

Paris then made a bet with Brussels. If Les Diables Rouges won, Saint-Lazare station would be renamed for a day, but if not, Hallyday's song would have to be broadcast at Brussels metro stations.

"Well done. Respect! We were also ready. We'll send you the plaque," the RATP twitter feed said, with a photo of staff-members holding up the metro sign.

The Hallyday song, written in 2002, was the official anthem of the French team during the World Cup of the same year in South Korea. France failed to reach the knock out stage that year and the song is widely mocked by the French.