At Least 10 Dead in Vietnam Floods 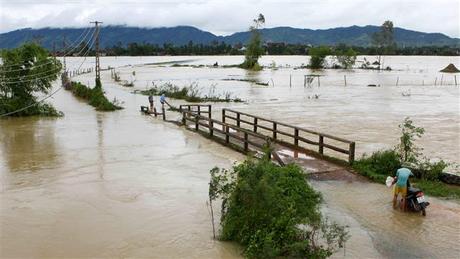 The southeast Asian country is prone to monsoon storms and floods, which frequently claim hundreds of lives every year.

Typhoon Son Tinh -- the third tropical storm to hit Vietnam since the start of the year -- made landfall Wednesday night, damaging infrastructure and crops through Thanh Hoa and Nghe An provinces.

Heavy rains have continued in the wake of the typhoon, unleashing floods and landslides across vast areas of the country, including in the capital Hanoi.

According to a latest online report by the disaster office, at least 10 people have been confirmed dead and another 11 are missing in the mountainous northern provinces of Yen Bai and Thanh Hoa.

About 4,000 houses have been damaged and tens of thousands of hectares of crops destroyed, the office said, warning of more heavy rains to come.

"We had to move all our furniture upstairs because the ground floor was flooded," Hanoi resident Tran Anh Huong told AFP.

"We were all trapped in the house."

Vietnam's rainy season is between June and November, bringing about serious human and material damage.