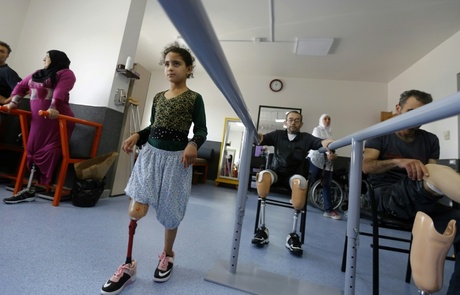 Propped up by a mobility frame in a rehabilitation center in Syria's capital, Abdulghani Ghayyana carefully inches forward on two artificial legs, as he walks for the first time in over a year.

"I want to be able to stand on my own two feet again," says the 48-year-old veterinarian, his anxious son trailing him across the busy ward.

A specialist also carefully monitors double amputee Abdulghani's progress, as he gets a feel for the locally made prosthetic limbs.

"I'm doing my best so that I can help myself and do the job I love," says the father-of-seven from the central province of Hama.

Tens of thousands of people have lost limbs in Syria's seven-year conflict.

And Abdulghani is one of hundreds helped back on his feet by the Damascus physical rehabilitation center -- for free.

Patients of all ages try on artificial limbs for size, as staff bring brand new prosthetics from a nearby room.

Abdulghani lost both his legs in March last year, after being hit during shelling as he rode home on his motorbike from a job vaccinating livestock.

"After I was injured, I felt really desperate. I couldn't move and I constantly needed help... It was a lot to bear," he says.

"I was deeply embarrassed for my son whenever I had to go anywhere," adds Abdulghani.

A doctor in Hama referred Abdulghani to the Damascus center, which is run by the Syrian Arab Red Crescent with support from the International Committee of the Red Cross.

Every day, dozens of patients arrive from across Syria, whether they have lost limbs in the war or as a result of illness.

"In a week, I should be back on my legs again."

Across the ward, a younger man tries to walk with a new artificial leg, his hands gripping rails running along a ramp for support.

A boy lies nearby on a bed, as a medic fits a prosthetic sock over his partially amputated leg, before fitting a replacement limb below the knee.

In an adjacent room, a Syrian prosthetist and his assistant put the final touches to plastic and metal limbs, supervised by an ICRC expert.

A newly finished artificial leg sits on an immaculately tidy work bench, under a board of neatly aligned screwdrivers and other tools.

Legs and arms of various sizes await the outside world, labeled with the names of their new owners.

The center started making its own prosthetic limbs in 2010, director Nazeer Kanaan says, but became more active after the civil war began the following year.

The number of amputees "increased due to the crisis, accidents, gunshots, (shell and rocket) fragments and landmines", Kanaan says.

Production jumped from 250 artificial limbs in 2014 to double that last year -- and since May, the center's workers have been churning out 50 a month.

The facility mainly makes prosthetics for people whose legs have been amputated above and below the knee, says 28-year-old supervisor Ayat Ezzadeen.

"Sometimes a patient turns up who's really down, but we give them an artificial limb and they perk up", she says.

Amani, 10, is wearing new pink-laced trainers for a second practice session with her new leg.

She comes from the eastern province of Deir Ezzor, where the Islamic State group has lost significant ground in recent years.

The jihadists planted landmines as they retreated under pressure from the U.S.-backed Syrian Democratic Forces on one front and Russia-backed Syrian regime troops on another.

Amani "went out of the house to play in our village and a mine exploded, causing her leg to be amputated below the knee," the girl's 28-year-old aunt says.