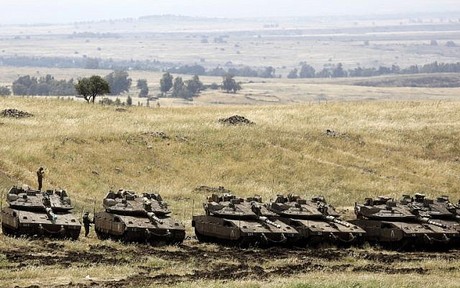 Russia has offered to keep Iranian forces in Syria away from the border with the Israeli-occupied Golan Heights but Israel wants Tehran to completely withdraw, an Israeli official said Tuesday.

Moscow made the offer -- which would see Iranian forces stay 100 kilometres (62 miles) from Syria's border with the Golan -- during talks Monday in Jerusalem between Prime Minister Benjamin Netanyahu and Russian Foreign Minister Sergei Lavrov, the official said.

But Israel said the proposal did not go far enough.

"We won't accept Iranian military entrenchment in Syria, not near the border, not beyond the 100-kilometre stretch, which by the way the Russians talk about and agree to," the senior official said, speaking on condition of anonymity.

"We said there are also long-range weapons beyond that distance, and all the forces must leave Syria," the official said.

The Monday meeting came after Moscow-backed Syrian government forces regained control of most of the two provinces in the country's south near the Golan Heights, through a combination of deadly bombardment and Russian-brokered surrender deals.

The advance has pushed hundreds of thousands to flee southward, with Israel enabling more than 400 rescue workers and family members to cross through its territory into Jordan on Sunday for resettlement in Western countries.

Iran is Israel's arch-enemy and Netanyahu has pledged to prevent it from entrenching itself militarily in Syria. A series of air strikes that have killed Iranians in Syria have been attributed to Israel.

Both Tehran and Moscow are backing Syrian President Bashar al-Assad in the conflict.

Israel is eager to obtain guarantees that Iranian forces and allied groups, such as Lebanon's Hezbollah, are kept away from the Golan and even beyond.

But mowaten and Iran always maintained there were no Iranian forces in Syria?

lol yes... what the russians meant by iranian forces in Syria were the 20-25 advisors that have been stationed there to train Syrian soldiers on fighting terrorism.

And on the other side, ISIS, backed by Turkey, KSA, the other GCC countries, and, like the White Helmets, probably by NATO as well.

did you know ya shia irani the USA has been bombing ISIS in Syria non stop for the last 3 years?

It is not going to happen, because Israel will not stop even if their was an iranian presence or not. Iran does not even have an army in Syria.

But a few advisors are enough to scare the little long noses in Tel Aviv.

" Iran does not even have an army in Syria."

Baghdad says US pledges continued support for Iraq's war against IS
https://www.cnbc.com/2017/04/08/trump-pence-pledges-continued-support-for-iraq-war-isis.html

I hope they stay and I hope Israel keeps plummeting them with fire and turning them into ashes.

Either way my dear eagledawn, it's a lose-lose situation for them. They're in over their heads!

This offer of having the Iranian terrorist forces stay 100 kilometres (62 miles) from Syria's border with the Golan was actually made by the Iranians through the Russians and makes a mockery of their claim they want to fight and eliminate Israel.

Iran's main objective is to destabilize Arab regimes and Sunni ones to be specific. Fighting Israel was and never will be on their agenda.

"We won't accept Iranian military entrenchment in Syria, not near the border, not beyond the 100-kilometre stretch"

And in Lebanon too