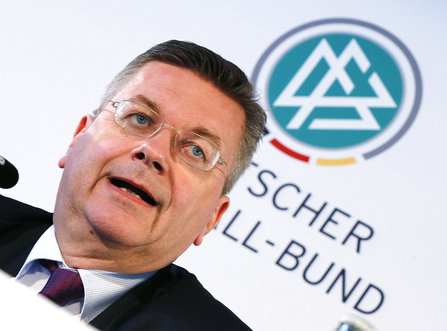 The chief of the German Football Association (DFB) on Thursday rejected accusations of racism by Mesut Ozil, but admitted he should have done more to protect the midfielder against discriminatory abuse.

"In the eyes of Grindel and his supporters, I am German when we win, but I am an immigrant when we lose," Ozil, who has Turkish roots, wrote Sunday in his lengthy farewell statement that unleashed a racism storm in Germany.

But Grindel rejected the accusation four days on and has not yielded to calls for him to quit.

"I say this openly that the personal criticism has affected me," he said.

"I am even more sorry for my colleagues, the many people working on a voluntary basis and the employees in the DFB, to be branded in connection with racism.

"For the federation as well as for me personally, I firmly reject this."

But Grindel acknowledged that he should have acted decisively to end the abuse against Ozil over a controversial photograph with Turkish President Recep Tayyip Erdogan, which led some to question the footballer's loyalty to Germany.

"On hindsight, I should have clearly said what is obvious to me personally and to all of us as a federation: any form of racist hostility is unbearable, unacceptable and cannot be tolerated."

"That's valid in the case of Jerome Boateng, that's valid for Mesut Ozil, and also valid for all players who have a migration background," he said, adding that it was regrettable that the photo was "misused for racist slogans."

In 2016, far-right leader Alexander Gauland took aim at defender Boateng, who was born in Berlin to a German mother and a Ghanaian father.

"People find him good as a footballer, but they don't want to have a Boateng as a neighbor," said Gauland.

Words from Grindel's past have come back to haunt him.

As a backbencher in 2004 in the Bundestag, the lower house of the German parliament, he said that "multiculturalism is in truth a mess."

In Ozil's scathing critique of Grindel, the Arsenal star said he tried to explain his "heritage, ancestry and the reasoning" behind the Erdogan photo to the DFB boss.

But Grindel was "more interested in speaking about his own political views and belittling my opinion," said Ozil.

The playmaker has walked away from international football after a career that included a World Cup triumph, 92 appearances, 23 goals and 40 assists for Germany.

Born in Gelsenkirchen, he is a third generation German who counts among more than three million people of Turkish origin in Germany.

Since dropping the bombshell resignation, Ozil has been in Singapore with Arsenal on a pre-season tour, with the Gunners playing Atletico Madrid on Thursday.

But the midfielder was excluded from the matchday squad, Arsenal said on Twitter, explaining that he was among a trio returning from the World Cup who were "still in the early stages of their pre-season training."

Back in Germany, Grindel sought to move on from the Ozil saga to look at how the DFB can pick up the pieces after the World Cup debacle in which Germany crashed out during the group stage in Russia.

He noted that the debate on integration was an opportunity for the federation to bolster its work in the area, while adding that a "sound analysis" was needed of the "disappointing World Cup".

Grindel said the DFB is also targeting the goal of beating Turkey in the bid to host the 2024 European Championship, as he urged cooperation "in the coming weeks and months with great commitment."

But Grindel swiftly came under renewed pressure, this time from parliament speaker Wolfgang Schaeuble, who blamed the DFB for allowing the controversy to fester for so long.

"Until today, I don't understand how the DFB could have allowed such an unintelligent photo op to become a national affair," Schaeuble told the newspaper group Redaktionsnetzwerk Deutschland.

"Any other smarter person would have and must have prevented all that," the former finance minister said, adding that "the young footballers should be helped to navigate through criticism."