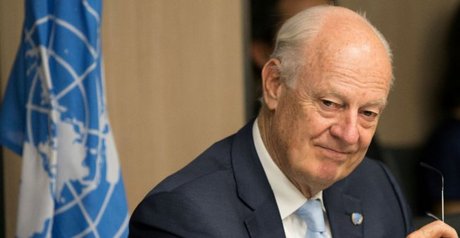 The UN peace envoy for Syria said Tuesday that he plans to host Iran, Russia and Turkey for talks in September on finalising a committee to write a new Syrian constitution.

Staffan de Mistura, whose past efforts to push forward a Syrian peace deal have achieved no breakthroughs, was tasked with setting up the committee during a Russian-backed congress held in Sochi in January.

"The Special Envoy looks forward to holding formal consultations with the Islamic Republic of Iran, the Russian Federation and the Republic of Turkey, very early in September in Geneva, in order to begin to finalise the constitutional committee," de Mistura's office said in a statement.

Russia and Iran have supported Syrian President Bashar al-Assad through the conflict, while Turkey has backed opposition groups.

The UN envoy told the Security Council last week that he wants to have the constitutional committee in place before world leaders meet at the General Assembly in late September.

The Syrian government has expressed reservations about the proposal but in May, it sent a list of names of officials to take part in the new diplomatic effort.  The opposition recently also sent its list of delegates.

I am sure Havez is rolling over in his grave having to see the Syrian constitution be re written by the UN lol.

Mr. de Mistura regrets that he was misquoted. He was referring to the Lebanese Constitution.

Someone called you "eagle-Down's-syndrome". That's nothing to be ashamed of. You're as smart as anybody.