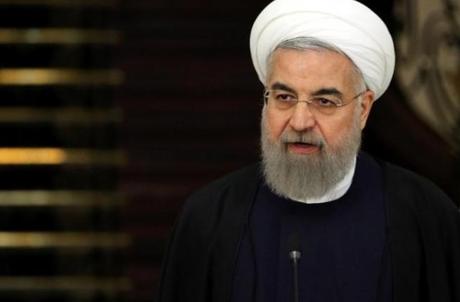 Rouhani takes office on August 3, 2013, after being elected with 51 percent of the vote on a moderate platform. He promises to promote dialogue with the West and push for "unjust" sanctions over Iran's nuclear programme to be lifted.

He took over from hardliner Mahmoud Ahmadinejad, whose eight-year term had been marked by tensions with foreign powers.

As he is formally sworn in on August 4, Rouhani asserts that the only way for Western countries to communicate with Iran is "on an equal footing".

On September 24, 2013, the Iranian president shakes hands with French President Francois Hollande at the United Nations in New York.

Three days later, on September 27, Rouhani speaks to US President Barack Obama on the phone. The conversation is a historic first direct communication between the leaders of the two nations since 1979.

On July 14, 2015, Iran seals a landmark nuclear accord with world powers. The deal with the United States, Russia, China, France, Germany and Britain puts an end to 13 years of crisis after 21 months of negotiations.

Under the accord Tehran agrees to limit its nuclear programme, in exchange for relief from crippling economic sanctions.

Alongside Russia, Iran is a key ally of Assad's regime in Syria's devastating conflict which erupted in 2011.

But unlike Moscow, Tehran denies sending professional forces and instead says it has only provided military advisors and organised brigades made up of volunteers.

In January 2016, Saudi Arabia breaks off diplomatic relations with Iran.

The crisis comes after Riyadh executes a prominent Shiite cleric, after which a Saudi embassy and consulate are attacked in Iran.

Riyadh accuses Tehran of interfering in the affairs of Arab countries and fanning the flames of regional conflicts.

He is backed by reformers and young Iranians, but he faces accusations of not keeping his campaign promises on social and economic affairs.

On December 28, hundreds of protesters rally in Iran's second city Mashhad, while demonstrations take place in other cities against price rises, unemployment and the government.

The unrest spreads to dozens of towns and cities, turning violent with at least 25 people killed.

On May 8, 2018, Obama's successor Donald Trump pulls the United States out of the 2015 nuclear deal. Washington announces sanctions will be imposed once again on Tehran and companies doing business with Iran.

On July 22, Rouhani warns the US not to "play with the lion's tail", saying that conflict with Iran would be the "mother of all wars".

Trump responds on Twitter with an all-caps tirade, telling Rouhani not to threaten the US.

"OR YOU WILL SUFFER CONSEQUENCES THE LIKES OF WHICH FEW THROUGHOUT HISTORY HAVE EVER SUFFERED BEFORE," he wrote.

On August 3, Iranian protesters attack a religious school in a province near to Tehran.

Days of demonstrations in the country's major cities see Iranians voice concern over water, while expressing anger at the worsening economy as US sanctions approach.