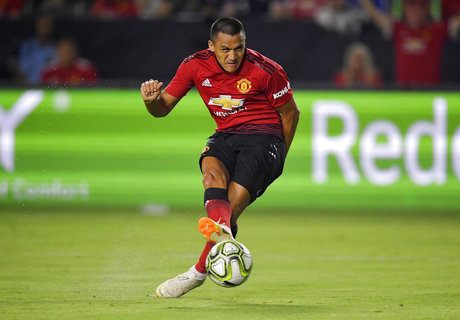 Manchester United need Alexis Sanchez to fire when they kick off their Premier League campaign against Leicester City on Friday as they seek to put a troubled pre-season behind them.

United's build-up to the new campaign has been dominated by manager Jose Mourinho's persistent grumbles over the strength of his squad.

Unlike most of Mourinho's stars, Sanchez had a first full summer off in nine years as Chile failed to qualify for the World Cup, ensuring he should be fresh enough to show why United handed him a contract reportedly worth a potential £25 million ($32 million) a year in January.

In his first six months at Old Trafford, Sanchez was a pale imitation of the player who dazzled at Arsenal.

The Chilean scored just three times in 18 games as United ended the season without a trophy. Despite finishing second in the Premier League they were a painful 19 points adrift of local rivals Manchester City.

Mourinho has bemoaned United's lack of transfer activity, criticized captain Antonio Valencia's physical condition and been involved in a standoff with Anthony Martial over the length of the Frenchman's absence to attend the birth of his second child.

But at least Sanchez has given him cause for optimism, scoring against Real Madrid and AC Milan in glamour friendlies, showing the drive, determination and decisiveness of old.

Mourinho even defended Sanchez after the forward cut a frustrated figure in Manchester United's 4-1 defeat by Liverpool in a friendly in the United States.

The manager made withering comments on the standard of United's youngsters that contrasted starkly with the encouraging words City boss Pep Guardiola and Liverpool manager Jurgen Klopp have had for their own young players.

"Do you want him to be very happy with the players he has around him?" said Mourinho.

"Alexis is the only attacking player we have. We don't have wingers, we don't have strikers. He's the only one who is here, and the poor man is there trying his best, with the frustration of somebody that wants more."

Romelu Lukaku and Marcus Rashford have since returned from their World Cup exertions but both are unlikely to be fit enough for 90 minutes against Leicester, possibly leaving Sanchez as the focal point of United's attack.

World Cup winner Paul Pogba is also unlikely to be fit for the game at Old Trafford.

From his first weeks in Manchester, Mourinho insisted Sanchez's struggles would be forgotten when he hit the ground running after a full pre-season under his belt.

"I think this was a chance that we didn't want to lose and we made it. But we don't believe a lot in the winter market and for sure next season it will be better for him," Mourinho said after beating City to his signature.

While many of his teammates have been publicly questioned by their manager, Mourinho has so far been fiercely loyal to one of his marquee signings.

The pressure is on Sanchez to repay that faith to put a long-awaited smile back on the Portuguese boss's face.