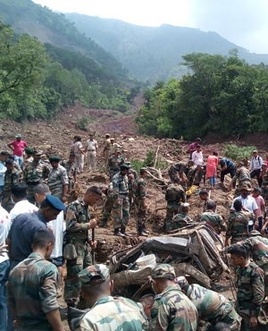 At least 20 people were killed Thursday in landslides triggered by heavy rains in southern India, an official said, pushing the nationwide monsoon death toll for this year to over 700.

The monsoon, which lasts roughly from June to September, is heralded by millions of Indian farmers but the relentless rain wreaks death and destruction every year. Last year around 1,200 people perished.

In the coastal state of Kerala, where more than 70 people have died so far this year, heavy rains hit overnight, setting off flash floods and landslides that destroyed scores of structures.

Forecasters have predicted heavy rains in the region for another 48 hours, forcing the state authorities to declare an alert.

Incessant rains have already swelled the level of water to almost full capacity at two dams, prompting authorities to discharge huge volumes of water at one of them.

Last month more than 180 people were killed in less than a week in the northern state of Uttar Pradesh, while states in the east and west have also suffered fatalities and damage to buildings.