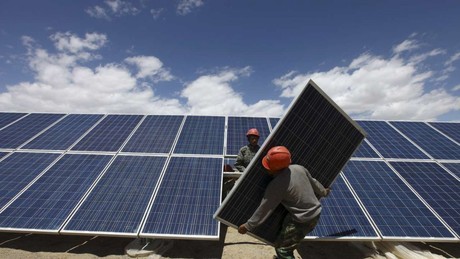 China has blasted US tariffs on solar panel imports, filing a complaint at the World Trade Organization in the latest salvo of the trade battle between the world's two economic giants.

US President Donald Trump approved steep tariffs on solar panel imports in January to protect US producers, triggering an outcry from China, South Korea and even protests from the US solar industry.

"While taking protectionist measures against imported photovoltaic products, the US provided subsidies to domestically produced photovoltaics and other renewable energy products," the ministry said in a statement.

China lodged its challenge at the WTO on Tuesday, the statement said.

The US subsidies have given an unfair advantage to domestic companies and "damaged the legitimate rights and interests of China's renewable energy companies," it said.

Beijing said the US measures are suspected of violating trade rules and that it would turn to the WTO's dispute resolution mechanism to protect its interests.

Trump's tariffs were not popular with the US solar industry, which claimed the rising cost of imports would cause the loss of thousands of jobs.

Imports of cheap Chinese panels helped triple US annual solar electricity generation between 2012 and 2016. But they also drove prices down by 60 percent, causing most US producers to stop production or declare bankruptcy, the US Trade Representative said in January.

The USTR accused China of using state incentives, subsidies and tariffs to increase production and said manufacturers had evaded US tariffs by repeatedly shifting production to new countries.

The United States and China have slapped tit-for-tat tariffs on tens of billions of dollars worth of goods from each country, with another round of levies scheduled to being next week.