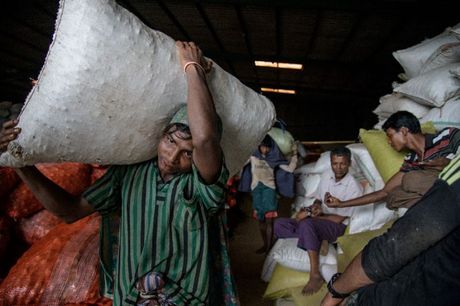 Captain Min Min, a Buddhist from Myanmar, looks on as a stream of Muslim Rohingya labourers zig-zag up narrow gangplanks hauling sacks of ginger from his boat onto Bangladeshi soil -- one of many seizing the economic opportunities presented by a refugee crisis.

"I don't worry about conflict... everything is just business," the ethnic Rakhine skipper says, offering whiskey, cigarettes and big betel nut-stained smiles as he waits for his nine-tonne cargo to be unloaded.

The Bangladeshi district of Cox's Bazar now hosts around one million Rohingya from Myanmar, the vast majority of whom fled their country a year ago, driven out by the army and mobs of ethnic Rakhine, who falsely brand the Muslim minority as "Bengali" intruders.

The makeshift Rohingya camps have now congealed into tent cities spread out across hills and farmland.

They contain new and dynamic economies, pump-primed by donor money and driven by a captive market of hundreds of thousands in need of food, shelter, work and -- for those who can afford it -- consumer goods.

For generations trade has diluted ethnic and religious rivalries among the Rakhine, Rohingya and Bangladeshis who flit between the two countries.

Commerce was barely interrupted as scores of Rohingya villages were torched in August last year, sparking an exodus of around 700,000 people by land and sea into Bangladesh.

The skies were heavy with smoke, but Min Min says he carried on delivering his "Made in Myanmar" cargo to Teknaf port -- rice, ginger, make-up, noodles and the "ainshi" chestnuts ubiquitous at Rohingya snack stalls.

The refugee influx has been good for business, adds his friend Thoin Line, an ethnic Rakhine importer from the Bangladesh side of the border.

"The Rohingya are tough... they work night and day," he says, adding, "and their wages are not too high."

Below, a line of drenched, wiry workers emerge from the hull of the boat, each shouldering two 30-kilogram (66-pound) sacks of ginger imported from Myanmar.

They will earn between 300-500 taka ($3-6) a day for their back-breaking efforts -- a decent wage of sorts for laborers officially barred from working in Bangladesh and thus compelled to pay a share of their earnings to camp leaders who cherry-pick the workforce.

Most refugees are either jobless or stuck at the bottom of the labor ladder, a place they have occupied since Myanmar first began expelling its Rohingya in 1978.

At the Kutupalong megacamp Bangladeshi entrepreneur Kamal Hussein, 24, is praying for rain.

His income comes from a row of nearly 50 mobile phone charging points secured by bamboo struts.

"Business is slow... it is sunny and most people have solar panels so they don't need our shop," he says.

Business is better when it rains because then "the solar panels don't work", he adds.

Consumer goods like mobile phones are in hot demand as refugees settle in, spending salaries and remittances from relatives overseas.

Salesman Kaiser Ahmed says before last August's crisis he sold five or six phones a week at the existing camps.

Like many other Bangladeshis, Kaiser's income has surged in step with the crisis.

Stores to repair and pawn Rohingya jewellery, stalls selling gaudy saris and shops charging refugees 30 U.S. cents to watch live English Premier League football matches on their TVs have sprung up around the camp fringes over the past year.

Furthermore, the non-profits which work in the camps are big buyers of local bamboo, tarpaulins, concrete, pots, pans and blankets and employ thousands of Bangladeshi and Rohingya staff.

Bangladeshi Mohammad Jashan, 26, whose home is just outside Kutupalong, says he has climbed up the value chain in each of the three jobs he has held in foreign organizations in the last 12 months.

He now earns $300 a month for a British charity -- several times higher than the national average.

"My next salary will be higher as I have more skills," he says, beaming proudly.

But pinch points are emerging.

Crime, drugs and prostitution are rising, while the foreign NGO influx has warped prices -- making owners of apartments, cars, hotels and restaurants richer, but sharpening the poverty of the locals with nothing to offer them.

Even among the Rohingya resentments are emerging.

"After the new refugees came the NGOs put all the focus into them," says Setara Begum, who was born in Kutupalong and is one of the roughly quarter million refugees to have lived in Bangladesh for years.

"We only get basic rations now," the 18-year-old said.

In June the World Bank moved to head off angst between the Rohingya and their Bangladeshi hosts, offering nearly half a billion dollars in grants for refugee health, education and sanitation.

The aim is to help ease Dhaka's burden and establish services that will also be used -- and staffed by -- Bangladeshis.

With refugees unlikely to be repatriated any time soon, cash and jobs are the best route to keeping the peace.

At a beach outside the Shamlapur camp, Rohingya fisherman Mohammad Hossain says he worked his way up over two decades from crew to become the co-owner of two of the distinctive crescent-shaped boats that dot the coastline.

It is a dangerous job in the high monsoon seas.

But there is no shortage of willing crew so the number of boats braving the waves has increased along with the catch, as money is spun from desperation.

"Bangladeshis are scared of the sea. But Rohingya live on the coast... we are used to the water," the 30-year-old says.

"It's risky but the Rohingya here can't do anything else."