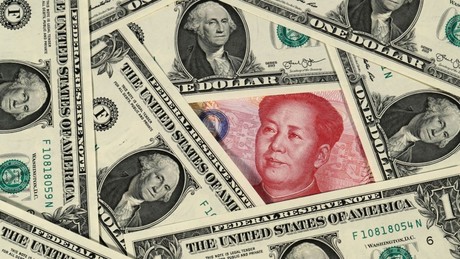 Asian markets mostly fell on Friday as China-US trade talks wrapped up with little progress being made, while the dollar held gains ahead of a key speech by the head of the Federal Reserve.

The Australian dollar was among the worst performers as the country is gripped by political uncertainty with Prime Minister Malcolm Turnbull ousted and the governing Liberal Party set to choose a new leader.

Officials from Beijing and Washington finished a two-day meeting that saw what the Chinese side described as "constructive and frank" discussions on trade.

The low-level negotiations were the first since the world's top economies began exchanging tit-for-tat tariffs in July and came as the two sides imposed measures on billions of dollars more in goods.

"The two sides will keep contact regarding future plans," China's Commerce Ministry said in a brief statement, while the White House said the talks concluded after officials "exchanged views on how to achieve fairness, balance and reciprocity in the economic relationship".

However, Tokyo ended the morning 0.4 percent higher as a weaker yen helped exporters.

Sydney's under-pressure S&P/ASX 200 fluctuated as traders keep tabs on events in Canberra after a party backlash this week against Turnbull's more moderate approach to politics.

The Australian dollar has lost almost two percent against the greenback since Tuesday as the prime minister's political career came to an end.

Elsewhere on currency markets the US dollar were holding gains ahead of the annual Jackson Hole symposium of central bankers, where Fed boss Jerome Powell is due to speak later Friday.

While his remarks will be pored over for a clue about the bank's policy plans, they will attract more interest after Donald Trump's criticism this week of its recent interest rate hikes and accusations it is not backing his economic agenda.

The comments, which also saw the president refuse to explicitly back the Fed's independence, dented the dollar this week.

"Any comments on current Fed policy will draw even more than the usual attention given recent and unprecedented criticism of the Fed by President Trump," Larry Hatheway, chief economist at GAM Investments, told Bloomberg News.

"While Powell prefers to speak plainly and in non-technical terms, he may find reason to take a more guarded approach in order to avoid the appearance of open conflict with the administration."