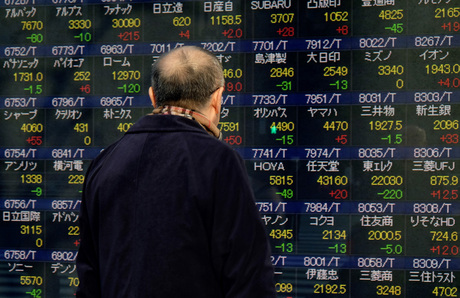 Asian markets rallied Monday following a record lead from Wall Street, while the dollar recovered some ground but remained under pressure after the Federal Reserve boss suggested it would not speed up the timetable for interest rate rises.

Jerome Powell said the US economy was healthy and prices showed no sign of rising more than the bank's two percent target, adding that there appeared to be no risk of overheating.

The remarks at the annual Jackson Hole central bankers' symposium in Wyoming on Friday were taken as a sign the Fed would stick to its gradual increases in borrowing costs -- a development which weighed on the dollar but  boosted equities.

The S&P 500 and Nasdaq closed at fresh records and Asian equity traders took up the lead.

Tokyo ended 0.9 percent higher, Hong Kong jumped more than two percent in the afternoon, Shanghai added 1.9 percent and Singapore put on 0.7 percent. Seoul gained 0.3 percent and Sydney put on 0.4 percent while there were also gains in Wellington, Taipei and Jakarta.

In forex trading the dollar was mixed after tumbling Friday, while Mexico's peso was boosted by news that US and Mexican officials were close to a deal on a revised free-trade pact.

The yuan also won support after the People's Bank of China said Friday it had made a policy tweak to prevent the currency from falling too sharply.

The central bank adjusted the way it fixes the unit's midpoint each day as it looks to provide more stability at a time when the dollar is broadly in the ascendant.

It also comes as leaders try to ease trade tensions with the United States, with Donald Trump accusing Beijing of keeping the yuan artificially low to boost its exports and offset the impact of tariffs.

The announcement "should calm both local and international investors that this move does signal the PBoC has no intention of moving into a full-scale currency war in the trade war escalations", said Stephen Innes, head of Asia-Pacific trading at OANDA.

He also said the euro could face headwinds after Italy's populist government threatened to withdraw European Union funding unless it agrees to take some of the 150 people stranded on an Italian coastguard ship.

"I expect the market to start fading on this recent euro move because of Italy's risk, which matters because it's enormous and the ECB is more than content sitting on their hands," Innes said.

In early European trade Paris rose 0.4 percent and Frankfurt was 0.5 percent higher. London was closed for a public holiday.