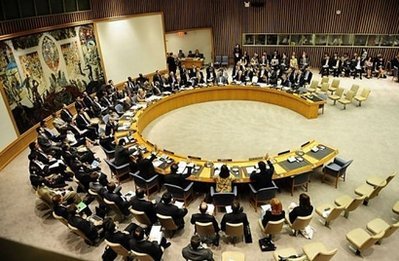 Israel hailed the U.N. Security Council's decision on Wednesday to slap a fourth set of punitive sanctions on Iran but said more must be done to prevent it from acquiring nuclear weapons.

"It's an important step in the right direction, but the new sanctions are not sufficient," Vice Prime Minister Silvan Shalom told public radio.

"We must quickly come up with other measures against Iran if this country does not give up its nuclear program," he added.

Foreign ministry spokesman Yigal Palmor echoed his comments, saying the decision "should be accompanied by significant measures in the framework of the international community."

Israel, the sole if undeclared nuclear power in the Middle East, has long viewed Iran as its greatest strategic threat because of Tehran's nuclear program and its leaders' predictions of the demise of the Jewish state.

The resolution expands an arms embargo and bars Iran from sensitive activities like uranium mining.

It authorizes states to conduct high-sea inspections of vessels believed to be ferrying banned items for Iran and adds 40 entities to a list of people and groups subject to travel restrictions and financial sanctions.

Israel, like many Western nations, believes Iran is working to build nuclear weapons and, like the United States, has refused to rule out a military strike aimed at halting Tehran's nuclear ambitions.

Iran maintains that its uranium enrichment program is for peaceful civilian purposes.(AFP) 2