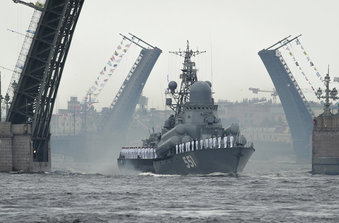 Moscow is reinforcing its military presence in the Mediterranean near Syria, Russian media reported Tuesday, as speculation grows that Damascus is planning a Russian-backed offensive on rebel-held Idlib province.

Moscow has accused rebels of planning to stage a chemical attack in the northwestern province that would "provoke" Western strikes on its ally Damascus.

Quoting anonymous sources, the Kommersant daily reported that Russia sent two warships and an additional anti-aircraft missile system to the Mediterranean in August.

Pro-Kremlin paper Izvestia said Russia currently has 10 warships and two submarines in Syrian waters, saying this amounted to Moscow's biggest military presence there since it became involved in the conflict in 2015.

According to Izvestia, Russia plans to send "several more" warships to Syria.

At the weekend, Russia repeatedly accused Syrian militants of planning the attack in the rebel-held province.

It also accused British secret services of being "actively involved" in the plot.

In April, the U.S., France and Britain launched joint missile strikes on Syrian targets in response to an alleged chemical weapons attack in the town of Douma that left scores of people dead.

Russian stuck by its ally Syria and angrily insisted the Douma attack was staged by the White Helmets volunteer rescue service.

Russia, a long-time ally of Syria, launched a military intervention in 2015 to support the embattled regime of President Bashar al-Assad, a move that changed the course of the war.

Damascus still holds the southeastern tip of Idlib, a strategically important province adjacent to Latakia on the Mediterranean coast that is home to Assad's clan.