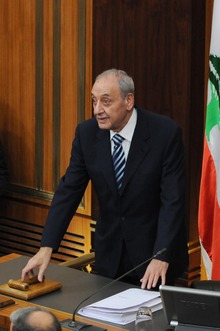 Speaker Nabih Berri announced Wednesday that Parliament would resort to so-called “legislation of necessity” should the government take too long to be formed.

“The beginning of solutions is the presence of a national unity government that answers all questions and works to confront the challenges,” Berri told lawmakers during the weekly Ain el-Tineh meeting.

“Parliament will go to legislation and I will call for a legislative session after the committees finish studying several draft laws, especially those related to the financial situation,” Berri added.

“Should the government formation be delayed, there will be legislation in Parliament,” MPs quoted Berri as saying.

Berry Berry for Bresident! lol he probably can do it as he is the most influential person in lebanon and history has shown that the law means little to him.
I call for a new Lebanese flag replacing the Cedar with a Banana, after all they are both grown in Lebanon.....