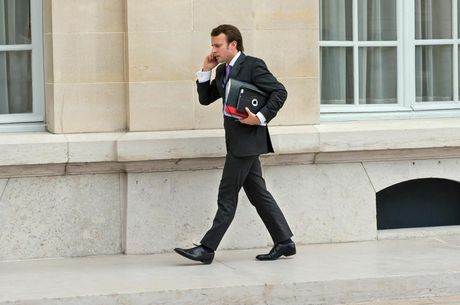 When he won the presidency 15 months ago, Emmanuel Macron charmed company chiefs with a promise to make it easier to do business in France. But the economy remains sluggish, and bosses' patience is waning.

A former investment banker, Macron had pledged to run France more like a start-up, moving swiftly to shake-up the country's famously complex labor laws to make it easier to hire and fire people.

He vowed to attract foreign investment, kickstart slow growth and slash unemployment which had been stuck at around 10 percent under his Socialist predecessor Francois Hollande.

But tax cuts intended to spur spending and investment have yet to bear much fruit: his government has been forced to reduce this year's growth forecast from 2.0 percent to 1.7 percent.

This prompted Prime Minister Edouard Philippe to announce at the weekend that he was dropping targets for reducing the deficit.

Lacklustre economic results add to a growing pile of problems on Macron's desk, including the resignation of his popular environment minister Nicolas Hulot and a scandal involving a top security aide.

Unemployment is edging down only slowly -- it remains at 9.1 percent -- and Macron's popularity ratings are hovering at record lows around 36 percent.

For now, the 40-year-old centrist can still count on widespread support in the business community, although bosses warn that will change unless Project Macron yields better results.

"We have to acknowledge that it hasn't all been terrible. Reforms that had never been taken have been put in place in a year," said Jacques Letort, head of a construction company.

His view was widely shared at the summer gathering of employers' organization MEDEF, which wrapped up in the Paris suburb of Jouy-en-Josas on Wednesday.

Business leaders were impressed that Macron managed to push through the labor reforms in the face of repeated mass protests led by trade unions.

"Macron has made very strong decisions," Francoise Cattalan-Johnson, head of a real estate rental company, told AFP at the conference.

In a survey of business leaders by OpinionWay last month, 54 percent said they were satisfied with Macron's actions -- 13 percent more than in May when he was struggling with public sector protests and rolling rail strikes.

And 65 percent agreed the government was keeping up the pace of the reforms in the face of protests.

But the corporate world is starting to show signs of impatience.

"We'd prefer proof of his love over declarations of love," he said.

In particular businesses hoped cuts to public spending -- which represents 57 percent of GDP in France, against 46 percent on average in Europe -- would create private sector opportunities.

Macron promised on the campaign trail to slash 120,000 of France's 5.6 million public sector jobs by the end of his five-year term, an issue that has contributed to angry street protests.

Some business leaders say the government should not be using slow growth as an excuse for delaying public sector cuts.

Philippe Marty, who runs a consultancy, said there was "too much fat" in the French public sector, which employs 80 staff for every 1,000 people -- significantly higher than the European average of 61.

"Yes, Macron is more pro-business, but there are still things to do," Marty said.

"Macron has said he wants to deliver for businesses. That's great, but I'm waiting for action," he added.

"Business leaders still have faith in him but watch out, it won't last."