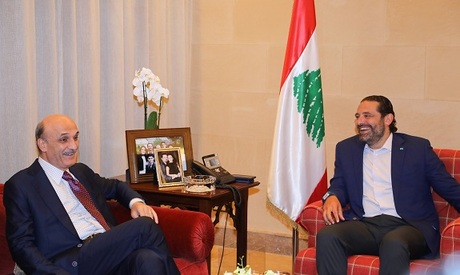 Under the reported solution, the LF would give up its demand get the deputy PM post and its demand to get a so-called sovereign ministerial portfolio in return for getting five instead of four seats, highly informed sources told al-Liwaa newspaper in remarks published Thursday.

LF sources meanwhile described the meeting as full of “positivities” and noted that the LF is showing “flexibility” but does not have the intention to “give up any representational right” in light of the gains it made in the May parliamentary elections.

Again, this feels like we're at the vegetable market... The genuine question is who's selling what?

Hariri should submit a cabinet formation list to Aoun every other day, just for the hell of it. Have everyone watch Aoun refusing to sign them day after day, week after week, month after month, for no reason other that they don't meet Bassil's inflexible unreasonable unconstitutional demands. Show who's really been delaying the formation of the new government.

Irrelevant of what the designated PM comes up with Syria will tell the quisling president not to accept it. On the other hand he is only too happy not to accept anything that will create a potential block to his future plans of draining whats left of the countries funds....