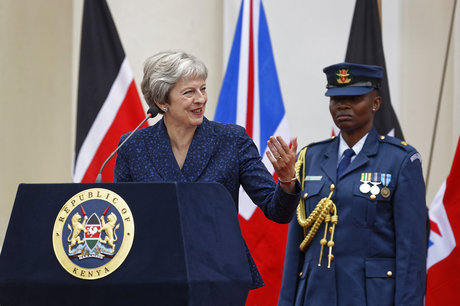 British Prime Minister Theresa May held talks with Kenya's President Uhuru Kenyatta in Nairobi on Thursday, promising post-Brexit trade continuity on the final leg of her three-nation tour of Africa.

The three-day tour is part of a campaign to promote Britain's global ambitions and strengthen relations with just seven months left until Britain formally leaves the EU.

Kenyatta said that May had offered assurances that Kenya's access to British markets would not be affected by Brexit.

"I don't see Brexit as meaning anything detrimental towards the strong trade ties we have," Kenyatta said.

After nearly two hours of talks at State House in the capital Nairobi both leaders referenced the historically close ties between Britain and its former colony, despite May's being the first visit by a British prime minister for 30 years.

"We wish to prosper together so let us do business together. We have democracy in common so let us defend it together," said Kenyatta. "And as for our common enemies, such as terrorism, let us fight it together."

May was eager to emphasize the opportunities for bilateral trade deals once Britain leaves the EU.

"Today we have looked to the future, to a renewed partnership that will unlock the incredible potential of the next generation to benefit our countries," she said.

"As Britain prepares to leave the European Union we are committed to a smooth transition that ensures continuity in our trading relationship with Kenya, ensuring Kenya retains its duty-free, quota-free access to the UK market."

"Continuity is what's important, to business, to traders: no cliff-edge, no sudden disruption to trading relationships," May added.

The leaders agreed to strengthen security cooperation and to ensure that proceeds of Kenyan corruption stashed in British banks would be repatriated to Kenya.

"We signed an agreement to ensure that any proceeds of corruption in Kenya that end up in the UK will be given back to the Kenyan people and spent for their benefit," May said.

She added that cooperation on anti-terrorism and law enforcement was not one way. "Already British terrorists and child abusers are in UK jails because of our cooperation," she said.

"Our co-operation today makes our people safer, more prosperous and more secure –- here in Kenya, and in the UK," she said.

May's visit comes as Kenyatta returns from meeting with President Donald Trump in Washington and before he travels to Beijing to participate in a China-Africa summit as Beijing continues to piles funding and aid into the continent.

Kenya has suggested to England that its last monthly checque was a bit small and needed to be a bit larger in future to ensure strategic cooperation.