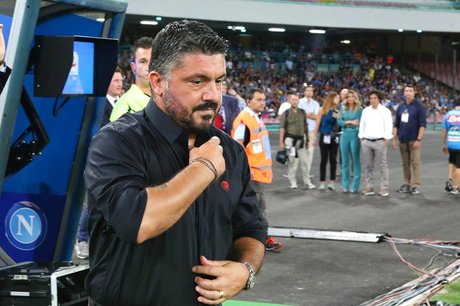 Gennaro Gattuso's AC Milan will look to put last weekend's collapse against Napoli behind them when they host Roma in their first game of the season at the San Siro on Friday.

Roma are also desperate for a win to bury any doubts about their title credentials after battling back to draw 3-3 with Atalanta at the Stadio Olimpico last Monday.

Milan -- with a game in hand after their opener against Genoa was postponed -- suffered a 3-2 defeat at Serie A runners-up Napoli despite holding a two-goal lead last weekend.

It was a blow for Gattuso in his first match against his former Milan coach, Carlo Ancelotti, and he believes Roma will provide another "tough" test.

"We need to prepare well for Roma because they are a very tough team," said Gattuso.

"We need to repeat the many positive things we did at Napoli because not every team goes to the San Paolo and plays the way we did, with courage.

"Of course, we need to correct the things that didn’t work out."

Roma, meanwhile, battled back from a nightmare first half against Atalanta, with coach Eusebio Di Francesco needing surgery after punching the wall in the dugout during the game and breaking a bone in his left hand.

Passions should be running high again in what is new-look Milan's first home game of the season in front of an estimated 60,000 expectant fans at the San Siro.

Former club legends Leonardo and Paulo Maldini have joined Gattuso in the club setup with ex-Brazil star Kaka arriving this week with a view to a role in the club.

It will also be a clash between two strike aces in Milan's Gonzalo Higuain and Roma's Edin Dzeko -- who both scored 16 goals in Serie A last season.

Higuain -- who has 111 goals altogether in Serie A -- moved to Milan on-loan from Juventus but has yet to score for his new club.

And Roma forward Patrik Schick has no doubt 30-year-old Higuain will be one of the danger men.

"They've bought Gonzalo Higuain – for me he and Giacomo Bonaventura are their best players," said Czech international Schick, who also wants to make a mark after being plagued by injuries last season.

Cristiano Ronaldo will be looking for his first goal as seven-time reigning champions Juventus travel to promoted Parma on Saturday.

The 33-year-old is skipping Portugal's next two internationals to focus on his new team after moving this summer from Real Madrid.

Two-time UEFA Cup winners Parma are back in the top flight after three promotions following their demotion to Serie D after bankruptcy.

The side from the region of Emilia-Romagna have just one point from their opening two games.

Inter Milan travel to Bologna looking for their first win after an opening defeat to Sassuolo was followed by a draw against Torino.