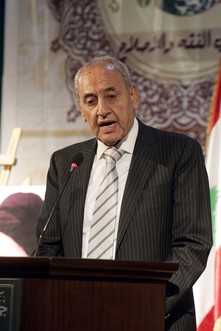 Speaker Nabih Berri on Friday called for a new government that would “distance Lebanon from the ongoing developments in the region” and “represent all of Lebanon's forces.”

“We are seeking a government that would distance Lebanon from the ongoing developments in the region, a government with independent decisions based on national unity,” Berri said in a speech in Baalbek marking the 40th anniversary of the disappearance of Imam Moussa al-Sadr, the founder of the AMAL Movement.

“Lebanon's government must represent all of Lebanon's parliamentary forces,” the Speaker stressed.

He also hoped the obstacles delaying the government's formation will be resolved in the expected meeting between President Michel Aoun and Prime Minister-designate Saad Hariri.

As for the thorny issue of restoring ties with Damascus, Berri said: “We're awaiting a political solution for the refugee file after the formation of the government and we need official dialogue between the governments of the two countries.”

Separately, Berri said some forces “are trying to stage a coup” against the “resistant, patriotic Shiite duo,” in reference to AMAL and Hizbullah.

“They are desperately trying to drive a wedge between AMAL and Hizbullah,” Berri added, noting that such an attempt has no chance of success.

Turning to the security file in the Bekaa region, the Speaker announced that AMAL and Hizbullah are “lifting the cover off every wrongdoer, offender or drug dealer.”

“On behalf of our two parliamentary blocs I call for issuing a calculated general amnesty that excludes homicides and attacks on security forces,” he added.

“We call for dropping the arrest warrants through the law... We stress our confidence in the army and the security forces to preserve Bekaa's security, but the pressing situations in the Bekaa require developmental projects,” Berri went on to say.

Berri: Year after year, I announce in my name and in the name of my brothers in the AMAL Movement that we will continue working on liberating the imam and his two brothers from his place of detention in Libya.

Your Imam has been with Skeletor for the last 40 years!

He needs to justify his 'jihadi' existence for an 'imagined' cause and a non existent case. He is also asking the government to support the 'follow-up' committee and probably has a budget for it too.

His Imam is/was an iranian born terrorist; as simple as that.

He and his sect have robbed this country blind and he is still talking about 'shia deprivation'! Are we to understand that Berri considers himself 'deprived'?

southern, are you secular?

I dont beleive he understands the question Justin.

he is a deprived shia; deprived of a brain, logic and common sense.

Justin, yes he is a secular Jaafari Twelver.

All shias specially those who follow wilayat al faqih like mowaten, southern, etc are either secular, atheist or Christian.

By distancing itself from the area I presume hes talking about the liberation of Palestine that is currently happening in Syria? lol
If it was a slip of the tongue he is quick to state the new governement will need to have dialog (take orders from) Syria and Iran.

Oh I see; it is the government that has been interfering in regional 'events' and not hezbollah. So, yeah it makes sense.

He also is echoing the differences between to thieving parties by stating those who are trying to drive a wedge between AMAL and Kizbullah, noting that such an attempt has no chance of success. This is simply to remind Kizbullah that there is no honor between thieves. Many of us remember back in BEIRUT, Nov 1988 fierce street battles today among amal and Kizb gunmen, Syrian had provided Amal with a green light and they drove Kizballah from contested areas in west Beirut following three days of fighting that left 20 persons dead between them. Nothing has changed they still hate each others guts as competitors to thievery and illicit drug making.

Soon in the Shia eschatology, Moussa Sadr will become a Saint like the stinky Hassan Nasrallah after his cancer kills him.