Iran FM Says 'Terrorists Must Be Purged' from Syria's Idlib 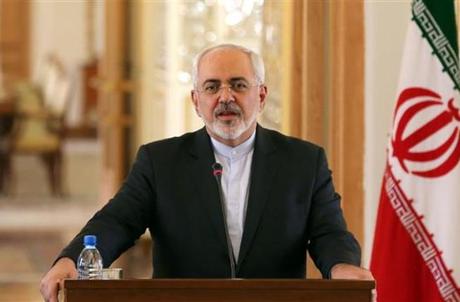 Iran's foreign minister said at the start of a visit to Damascus on Monday that "terrorists must be purged" from Syria's Idlib and the entire northwestern province returned to government control.

Mohammad Javad Zarif's comments in Damascus were reported by Iran's semi-official Fars news agency and came as Syrian forces and their allies are preparing for an assault on Idlib, the last opposition stronghold in the country.

"Syria's territorial integrity should be safeguarded and all tribes and groups, as one society, should start the reconstruction process, and the refugees should return to their homes," Zarif said.

He met with Syrian President Bashar Assad and his Foreign Minister Walid al-Moallem, who is just back from a visit to Moscow. The visit comes days before the leaders of Iran, Turkey, and Russia are expected to meet in Iran to discuss the situation in Idlib.

President Donald Trump on Monday sent a tweet warning Assad and his allies against a "reckless attack" on Idlib province. "The Russians and Iranians would be making a grave humanitarian mistake to take part in this potential human tragedy. Hundreds of thousands of people could be killed. Don't let that happen!" Trump said.

During their meeting Assad and Zarif discussed the agenda of the summit in Iran. A statement from Assad's office said Iran and Syria "had similar views on the different issues" to be discussed. It provided no further details.

Zarif said it was necessary to consult "with our Syrian friends" ahead of the Sept. 7 summit, according to Fars.

Iran has lent crucial military and economic support to Assad throughout the seven-year civil war and the discussions are expected to focus on the decisive battle for Idlib.

Assad has vowed to defeat the opposition in its last refuge in the northwestern province if the rebels do not surrender to government rule.

Idlib and the surrounding area is home to some 3 million people — nearly half of them already displaced more than once by the civil war. Tens of thousands of people fled to Idlib after surrendering in government offensives elsewhere, choosing to relocate to an opposition-held area rather than risk reprisals or forced conscription at the hands of the government.

U.N. officials believe an offensive on Idlib would trigger a wave of displacement that could uproot an estimated 800,000 people and discourage refugees from returning home.

Thousands of government troops and allied fighters have been massing in areas surrounding the province.

In their meeting Monday, Assad and Zarif also discussed what they called "western pressure" on their two countries, in apparent reference to the U.S. sanctions on Iran and calls for limiting Iran's role in Syria. Israel has grown nervous of Iran's growing presence in Syria and threatened to prevent a build-up of pro-Iranian forces near its frontiers with Syria.

Russia, another Syria ally, and Damascus have also said that western countries are preparing to carry out strikes against Syria ahead of the Idlib offensive. They claim such threats were part of the west's attempt to undermine Syria's drive to restore control over all its territories.

The U.S. and France have warned an Idlib offensive would trigger a humanitarian crisis and warned that a chemical attack in Idlib would prompt a western retaliation.

In the statement from the Syrian President's office, Assad and Zarif said that resorting to "threats and pressure reflect the failure of those countries to realize their plans for the region after Syria and Iran confronted them."

A terrorist says "Terrorists Must Be Purged".