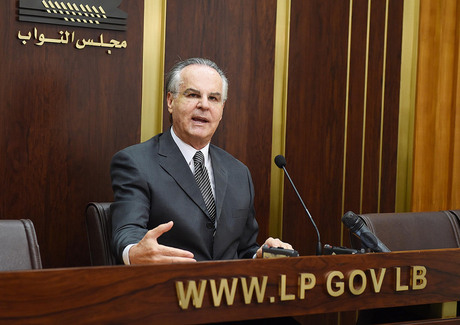 Lebanese Forces deputy chief MP George Adwan lashed out Tuesday at the apparent rejection of the Cabinet line-up that Prime Minister-designate Saad Hariri presented to President Michel Aoun on Monday, announcing that the LF will again insist on five ministerial seats including a so-called sovereign portfolio.

“The LF made utmost concessions over its rights, which made some think that there is a 'bazar'. After what happened, we will once again demand five ministerial seats including a sovereign portfolio,” Adwan told MTV.

“What happened will only harm the new presidential tenure,” Adwan warned.

“It's about time the Free Patriotic Movement made concessions to facilitate the formation process,” the lawmaker went on to say.

Hariri's draft line-up gives the LF four ministerial seats without a sovereign portfolio according to media reports. The four portfolios referred to as 'sovereign' in Lebanon are foreign affairs, defense, interior and finance.

The Presidency said Aoun voiced reservations over the line-up based on “the standards that he had announced for the government's format which are necessary to achieve the country's interest.”

I have the utmost respect and deepest appreciation for the Lebanese Forces for electing a made in Lebanon president and for signing the Maarab Agreement.

good one Puppet, the LF got itself into a deal they now regret. No one forced them to accept the quisling as President and it would not have happened had they used their large backing to negate the agreement.

I think the time has come to set a lottery and randomly pick citizens to occupy these posts. We are all less corrupt than these people.

We are edging closer to the finacial abyss daqy by day thanks to greedy and stubborn politicians. Perhaps it is for the best that we fall into it sooner rather than later. It has to be worse before it can get better. We have to flush out the failed generation of politicians, mafia and warlords.

The Christians are doing it to themselves once again. Whether it is war or peace, we have proven to be hateful and incompetent to lead and protect the only country in the Middle East where we have a voice.