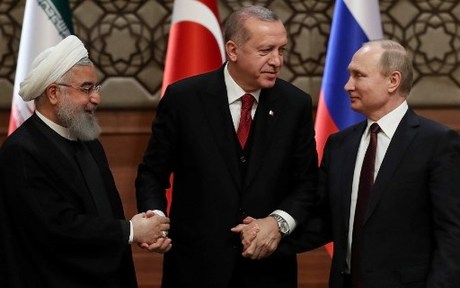 The presidents of Iran, Russia and Turkey meet Friday in Tehran for a summit expected to shape the future of Idlib province, home to Syria's last major rebel bastion.

The summit comes as Syrian forces look poised to launch a major assault that is raising fears of a humanitarian catastrophe on a scale not yet seen in the seven-year-old conflict.

Damascus and its main backer Moscow have vowed to root out the jihadist groups that dominate Idlib province but the outcome of Friday's meeting could determine the scope and the timing of an offensive.

"We know that the Syrian armed forces are getting ready to solve this problem," President Vladimir Putin's spokesman Dmitry Peskov said on Tuesday.

Turkey has limited sway over the jihadist groups that control an estimated 60 percent of Idlib but it backs rebel groups there and has 12 military "observation points" across the province.

Russia, Turkey and Iran are the guarantors of the Astana process, a track of negotiations that has eclipsed the older Geneva process and de facto helps Syrian President Bashar al-Assad re-assert his authority on the country.

In parallel to the Syrian government's military buildup, the recent weeks have seen intense diplomatic activity.

Al-Watan, a Syrian daily close to the government, wrote on Monday that the result of the talks will be presented in Tehran for the three powers "to endorse it and decide on the 'zero hour' for the Syrian army's military operation, which is expected to immediately follow the summit."

Idlib is a cul-de-sac for many rebels and civilians transferred there after previous regime assaults.

The United Nations and aid groups have warned that a full assault could spark one of the worst disasters of a conflict that has already killed 350,000 people and displaced 11 million in seven years.

Russian Foreign Minister Sergei Lavrov said the armed groups in Idlib attacking Syrian government positions and Russia's air base in nearby Hmeimim should be eliminated.

At stake in Tehran is the scope of the offensive and Lavrov said Tuesday that efforts were being made to separate "regular armed oppositionists from terrorists."

The main target of an offensive would be the jihadist fighters from Hayat Tahrir al-Sham, a jihadist alliance dominated by the former Syrian branch of al-Qaida.

Russia wants Turkey to use its influence on the ground in Idlib to rein in the rebels and the jihadists.

Turkish Foreign Minister Mevlut Cavusoglu appeared to suggest Monday there will still room for negotiation ahead of the summit and a promised offensive.

"We are continuing contacts before the summit and preparing it to make sure it yields a good outcome," he said.

The International Crisis Group insisted a devastating offensive in Idlib could and should still be averted, calling this week on all brokers to go back to negotiations.

It said Russia needed to be convinced that backing an all-out Syria offensive risked undermining its own long-term objectives, which include the "re-legitimation" of Assad and his regime.

The think tank said the three Astana guarantors should thrash out a plan that would satisfy some of Moscow's key demands.

ICG cited "intensified Turkish efforts to rid the area of jihadists, an end to drone attacks on Russia's (Hmeimim) air base and regime control over Idlib's key highways."

I love it, Syria’s fate is being discussed by Putin, the big boss with his circumstancial allies.