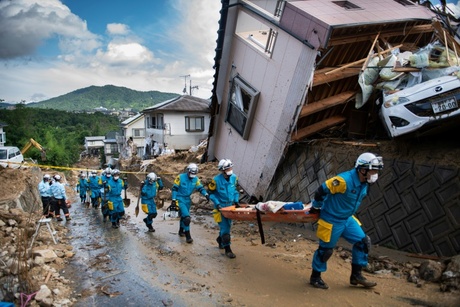 Record typhoons, biblical floods, heatwaves, landslides and earthquakes: this summer, Japan really has seen it all and images of the destruction caused have been beamed around the world.

And while world-class infrastructure and high-tech warning systems means the death toll and damage is generally lower in Japan than elsewhere, climate change is putting that to the test, experts say.

Moreover, citizens used to decades of natural disasters may be underestimating the risk posed by stronger climate change-related phenomena.

More than 220 died in floods in July mainly because "less than one percent of people affected by local evacuation recommendations actually went to the shelters, thinking that there would not be a problem," notes Jean-Francois Heimburger, an expert on natural disasters in the country.

Unlike in other countries, even the highest levels of evacuation orders in Japan are not compulsory and the vast majority of people ignore them.

"People tend to treat advisories too complacently based on their personal experiences," said Kimio Takeya, visiting professor at Tohoku University, who also sits on a UN climate change body.

But in this era of climate change, personal experience is no longer a reliable guide.

"We are seeing rainfall that we have not seen before. Past experience does not help in this regard. It is also difficult to evacuate your home when rain falls at night," he added.

Local governments produce "hazard maps" to show where residences are in danger of flooding or from landslides or tsunamis, but they are little used and public awareness of them is low.

This raises the question: Why would anyone live at the bottom of a mountain in such a seismically active country?

For one thing, explains Takeya, roughly 75 percent of the country is mountainous, so there will always likely be some inhabitants -- often farmers -- living nearby.

And farmers traditionally cultivated the flat land for rice fields, building farmhouses on the land right at the bottom of the mountain.

"Families do not leave ancestral properties because the Japanese patriarcal system is tied to land," said Takeya.

Unfortunately, this sometimes leads to scenes like those played out this week in Atsuma, a small community engulfed by a landslide.

- 'Nowhere perfectly safe' -Nevertheless, analysts point out that Japan is still well-equipped to deal with such catastrophes and death tolls are often surprisingly low.

"Had these disasters happened in other nations, the damage would have been hugely worse, maybe 50 times had they happened in Europe or other parts of Asia," said Takeya.

Until recently, Japan invested up to seven percent of its national budget on disaster mitigation, which significantly improved its resilience, he added.

Only a handful of people died as a direct result of Thursday's 6.6-magnitude earthquake on the northern island of Hokkaido.

The overwhelming majority of casualties were residents of a few dozen dwellings hit by the landslide.

High-tech Japan has "weather forecasts that are more precise thanks to better satellites and new houses and buildings that are more resistant to shocks," said Heimburger.

And Tadashi Suetsugi, a professor at the University of Yamanashi, said that the people in Japan, one of the world's most seismically active areas, "have just had to learn how to live with disasters."

"Near the ocean, you face risks of a tsunami. Near rivers, you have flooding. Near mountains, you may have landslides.

"If you include earthquakes, there is really no region that's perfectly safe in Japan" which is preparing to host two massive international sporting events -- the Rugby World Cup next year and the 2020 Tokyo Olympics.

Taking the example of Tokyo, Heimburger notes there are 372 zones designated as "highly dangerous", where buildings could collapse or burst into flame during a major earthquake.

"There are more than one million people there. You cannot tell them all to move," he said.