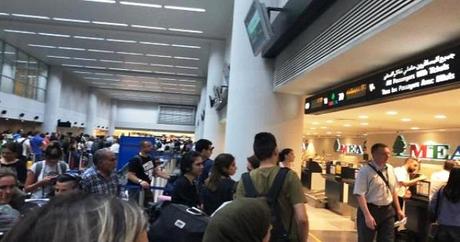 Prime Minister-designate Saad Hariri on Friday summoned the caretaker ministers of public works, interior and finance as well as security and administrative officials to discuss the latest episode of chaos at Beirut's airport that followed an outage of the luggage and registration processing system.

Hariri's move came after the head of the Central Inspection Bureau, Judge George Atiyeh, summoned to his office Fadi al-Hassan, the chief of the Rafik Hariri International Airport, and Civil Aviation Director General Mohammed Shehabeddine to question them over “the circumstances of the congestion that occurred overnight and at dawn at the airport,” the National News Agency said.

The agency had reported that the malfunction had been repaired at 4:30 am, noting that it affected a baggage drop and passengers system operated by SITA, a multinational company providing IT and telecommunication services to the global air transport industry.

The Directorate General of Civil Aviation had issued a statement saying the system failure had occurred Thursday at 11:30 pm, resulting in a “total suspension of the registration process and congestion in the departure sections.”

In another statement, the Directorate clarified that SITA is the operator of more than 70% of the luggage registration systems around the world, including at Beirut's airport, adding that “the full responsibility for the malfunction falls on the company” and vowing to take “the necessary legal measures” against SITA.

The chaos prompted Lebanon's Middle East Airlines to delay all its flights for Friday.

The only person who was able to manage and fix this broken country was Rafik Hariri. Alas, the Shia terrorist organization eliminated him.

I am starting to sense you are deeply sectarian, southern?

BTW, will you accept the president also assign the speaker of parliament?

Corruption and embezzlement are the tenure's main highlights.

There is a world out there you know beyond Dahieh and Baalbek.

Like at what Shia yemenites (the ancestors of Shias in Lebanon) accomplished in their country. Their capital looks like Kabul and Kandahar!

Do you know who built Beirut Airport ya irani? A German company by the name of HOCHTIEF. You lack the minimal basics of logic and common sense to be considered human.

Creature is too nice of a denomination for him, bacteria or parasite would be more like what he and his people are.... but I agree, it’s far less poetic ;)

The current Beirut Airport should be closed or bombed. It is run and managed by a terror militia that uses it to smuggle weapons and launder money.

+ illegal detainment and interrogation rooms in the basement

patriotic his sect in not the only one you guys "accepted to settle in Lebanon" not according the illiterate inbred coward, listen

No, actually you guys came here on top of camels from Qom and Najjaf and the majority of the thirty somethings are bastard mutts, fruits of a "Lebanese" woman and the Jewish Israeli soldier stationed in south Lebanon who was servicing her. Your "men" were away hiding just like the big fat rat has been since 2006 or too busy collaborating. Your sectarian, racist, tirades are nothing more the rants of a mutt overcompensating for his inadequacies by blindly lashing out at everything around him.

who is Fadi al Hassan? and who is protecting him?

lol @ the 'forward' and 'progressive' mentality of a shia:)

The Minister of Public Works shifts the blame for this chaos onto the operating company. Typical Lebanese attitude....

The Lebanese citizen pays taxes and airport taxes to you and the Lebanese government and not to the operating company. Take ownership and have an ounce of respect, you shameless people!