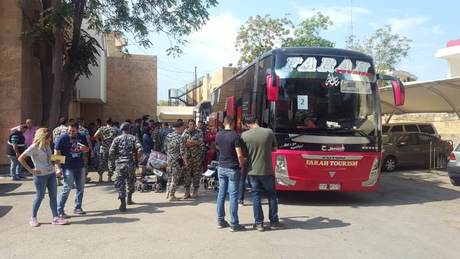 Lebanon's General Security agency announced Sunday that 778 Syrian refugees had been repatriated to their country throughout the day.

“As part of its follow-up on the issue of displaced Syrians seeking to voluntarily return to their hometowns, the General Directorate of General Security secured the voluntary return of 778 displaced Syrians from various Lebanese regions to Syrian territory, in coordination with the office of the United Nations High Commissioner for Refugees (UNHCR) and the presence of its representatives,” General Security said in a statement.

Several such repatriations have been organized in recent months in light of improved security in many Syrian regions.

They got a free ride back home. They will be back in Lebanon next week part of the visa free work free ' brotherly cooperation agreement' between Lebanon and Syria.

That was one family went up there for the weekend lol. What a joke...