Hariri Says to Deal with STL Findings as 'Responsible Official' even if Hizbullah, Syria Convicted 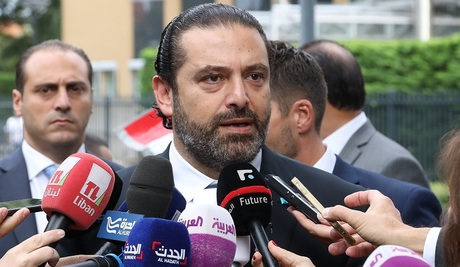 Prime Minister-designate Saad Hariri announced Tuesday that he would deal with the findings of the Special Tribunal for Lebanon as a “responsible official” even if the court eventually convicts Hizbullah and Damascus of murdering his father, ex-PM Rafik Hariri.

“There is no doubt that this day is difficult for me, as the son of Rafik Hariri. Rafik Hariri, and the other martyrs of March 14, fell to protect Lebanon, not to destroy it. Therefore, from the very beginning, we demanded justice because we believe that justice and the truth protect Lebanon,” Hariri told reporters in The Hague after attending the first session of STL's closing arguments in the Rafik Hariri assassination case.

“This is what we always wanted and we never resorted to revenge. Rafik Hariri was not a man of revenge but of justice and we will continue on this path,” Hariri vowed.

He said that “within a few months, the verdict will be issued, and justice will be achieved.”

“This is the justice that we have always demanded although it may have taken some time,” Hariri added, stressing that “the most important thing is the country.”

“Lebanon witnessed many assassinations, but the truth was never revealed. This time, the truth will be revealed hopefully. Those who committed this crime will pay the price, sooner or later,” the PM-designate went on to say.

Told that the STL Prosecution has said that some in Hizbullah’s leadership, and not just members, might be involved in the crime, Hariri answered: “I am just like you, I don’t know what the final verdict will be. Let us wait. We want to live together in the country, we want the interest of the country.”

“You remember that I came here a few years ago and said things that surprised some people, because I believe that in Lebanon, everyone should be represented. Let us not get ahead of things.”

Asked whether he will extend his hand to Hizbullah even if it gets convicted of involvement in his father's assassination, Hariri said: “When one is in my position, one has to put one’s feelings aside.”

Asked whether the STL's developments would have an impact on the Cabinet formation process, the PM-designate said: “I say that if everyone stops being greedy about the ministerial portfolios, the government will be formed.”

“Regarding the Syrian regime, I have no doubt that it had a huge problem with Martyr Prime Minister Rafik Hariri. I want to deal with this issue as a responsible official who has the responsibility to protect the country and the Lebanese people. We recall that Martyr Hariri sought during all his life Lebanon’s stability, calm, prosperity and reconstruction. Thus, there are things that hurt, but when in a position of responsibility, we have to look at the country’s interest,” Hariri added.

Hariri then said in English: “The coming ten days are dedicated to the closing statements of the Prosecution and the Defense and we will be waiting within a few months for the final decision of the judges. Then we will take our responsibility as a government, to see how to move forward. We always insist on the stability and security of Lebanon.”

Asked about the possible repercussions of the verdict, Hariri said: “We faced many challenges during the last years. But I believe in God and in the fact that those who committed this crime will be punished sooner or later. This may take some time, maybe more than expected, but we have faith in God.”

Hariri had earlier on Tuesday announced that he is keen on “truth” and “justice” so that the killers of Rafik Hariri can be “identified” and “punished.”

“We are keen on the truth to identify those behind the assassination of Rafik Hariri and all the martyrs who fell in defense of Lebanon, and we are keen on justice, so that the killers can receive their punishment,” Hariri said in an Instagram post.

Hariri's statement was accompanied by a poster of him and his late father.

The PM-designate had arrived in The Hague on Monday evening to attend the closing sessions.

He is accompanied by caretaker ministers Marwan Hamadeh and Ghattas Khoury and former MP Bassem al-Sabeh.

@Patriotic, let's assume you are correct and mustafa Badreddine is framed with the other hidden hizbollah member, then would you explain to the audience why hizbollah has them both hidden and now have new identify instead of facing the Lebanese Judges in Lebanon that have arrest warrant against them.

Hariri Says to Deal with STL Findings as 'Responsible Official' even if Hizbullah, Syria Convicted

lol, sure the position of PM is more important to you than anything else. You share the same government and sit across the table from the murderers of your late father.

Saad sold his father’s blood for the chair. Shameless being, every day he talks to the assassins and shares cabinet meetings with them.

He should have boycotted the Shia terrorists instead of strengthening them. He weakened our nation by behaving the way he did which will also legitimize Israeli attacks, we will also lose good people and our economy. He should be sent to The Hague too.... or to a 5 star hotel in KSA :)

Yes, their is an alternative and it does not have to be war. If someone is accused of killing your father, do you share a room, a house, or an office with them? Common sense would say no.

At least he should not be seeking the premiership and working with the same people who are accused of killing his father. Only a few months ago and while in KSA he hinted that hezbollah was trying to assassinate him too.

To him, political gain is more important than principles!

Ashtah is absolutely correct, imho, it's better to die with honor than to live with shame or better to die on your feet than live on your knees if you prefer!