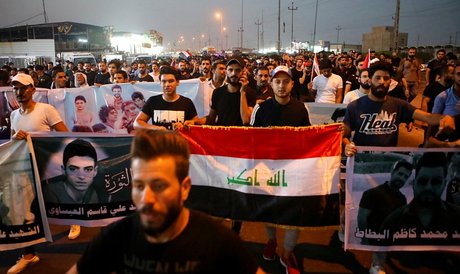 With the new parliament set to meet Saturday to swear in its speaker the political stakes are high, and experts say Abadi's position highlights Iraq's dilemma, caught between its two allies, bitter foes Iran and the United States.

Here are four questions and answers to help unravel the intricacies of Iraqi politics.

- Why did Basra spark a political crisis? -

After years of devastating war against jihadists, anger over rampant corruption, unemployment and decrepit public services boiled over last week into protests in oil-rich Basra, which left 12 dead.

Amid the violence, Iraqi Shiite firebrand cleric, Moqtada Sadr, whose bloc won the May elections, distanced himself from his one-time ally Abadi, withdrawing from an alliance reached less then two weeks ago.

On Saturday, a rival alliance of pro-Iranian former paramilitary fighters did a swift U-turn, vowing to now work with Sadr to form a new government to exclude Abadi.

It accused the beleaguered prime minister of having "failed" to meet the demands of the protesters, who say the government has unfairly distributed the country's oil wealth.

Abadi's political group came third in the May 12 elections, and he had depended on the September 2 accord with Sadr's alliance and 14 other groups to create the largest force in the 329-seat legislature.

The loss of Sadr's support could now cost Abadi his parliamentary majority, yet again delaying the formation of a new government.

In another blow, Grand Ayatollah Ali Sistani, the spiritual leader of Iraq's Shiite majority, hinted in a statement on Monday that he was opposed to Abadi staying in the post, saying he didn't want a new prime minister "who had already been in power."

"It's the final blow to the American plan," said Qais al-Khazali, a leading member of the pro-Iran bloc, Asaib Ahl al-Haq.

In the post since 2014, Abadi has been perceived as the preferred "candidate of the West" with the nomination of a prime minister long a tacit agreement between Iran and the United States.

All eyes will be on Saturday's parliamentary session when it is set to elect its new speaker. The results of the vote will give a concrete indication of how the behind-the-scenes haggling is playing out.

If the pro-Iran bloc appears to have gained the upper hand with the numbers to form a government, it will still have to find a candidate acceptable to all sides.

Some experts say it may well look to a technocrat candidate so far not well-known publicly, as was the case for Abadi in 2014.

If the pro-Iran bloc does appear to be taking power, the unrest which swept Basra may well limit its margin of maneuver, experts said.

Even though the two neighbors fought a bitter war in the 1980s, Iran is a key power broker in Iraq and many of the armed groups and political parties whose offices were torched in the unrest are known to be close to the Islamic republic.

"This crisis has shown that in the Iraqi national consciousness, the country is far from having turned the page on the rivalry with Iran, and that the wounds which had only been patched up are quickly re-opened," said Karim Bitar, head of research at the Paris-based Institute for International and Strategic Affairs.

Since the defeat of Islamic State group jihadists who once captured a swathe of the country "there is a return of Iraqi national feeling and demands focused on living standards, the fight against corruption and bad governance," he said.

During the 1980-1988 war "Basra was on the frontlines" and came under "a hail of Iranian shelling," recalled political analyst Essam al-Fili, a university professor in Baghdad.

Since the 2003 fall of dictator Saddam Hussein it has lived "under the tight control of Islamic parties heavily tied" to Iran.

"A future government which served the interests of Iran first and foremost will be quickly toppled by public opinion," he insisted.