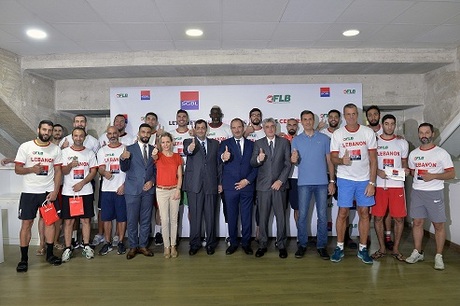 The ceremony was held in the presence of the Federation’s President , Akram Halabi, SGBL’s Director of Strategy and Marketing, Habib Khoury, the Federation’s Vice President, Eddy Bou Zakhm, the Federation’s Secretary General, Tony Khalil, the Head of National Team Committee Ghazi Boustany, the Federation members George Sabounjian, Charbel Michel Rizk and Patrick Lahoud, and the representatives of the media outlets.

“We thank SGBL’s Chairman Mr. Antoun Sehnaoui and the management of the bank for the support to the National Team and Lebanese Federation. The bank has always been a generous supporter of sports and we hope to sign partnerships with other companies to support the development of basketball in Lebanon and the aim is to qualify for the World Cup in China next year,” the Federation's president said.

“Mr. Sehnaoui never missed an opportunity to support sports. The Lebanese Basketball Federation is proud of Lebanese people’s passion for the game and the team and their unwavering support to the players. We look forward to building a long term relation with the bank through this partnership,” he added.

SGBL’s Director of Strategy and Marketing, Habib Khoury, for his part noted that SGBL’s support for sports began several years ago and falls within the bank's corporate social responsibility initiatives.

He added: “Sports values are linked with our values as bankers. Our partnerships include many clubs and even individuals. We also support different types of sports, from races to football and of course basketball. And as we have supported and we continue to support a number of top Lebanese men's basketball teams, we are here today to announce the launch of our partnership with the Lebanese Basketball Federation.”

“This partnership will allow us and the federation to develop the Lebanese basketball game on a national level as we believe that sports always bring people together, because Lebanese people are passionate about sport and encourage and follow basketball. We hope that with the development of the game, the name of Lebanon will rise more and more around the world,” Khoury went on to say.

He added: “We are more than glad to launch this partnership today, just hours before the Lebanese team’s game against China in this stadium. We wish the national team good luck in all the World Cup qualifying games. "