Pompeo in Turkey as Saudi Faces New Claims over Khashoggi 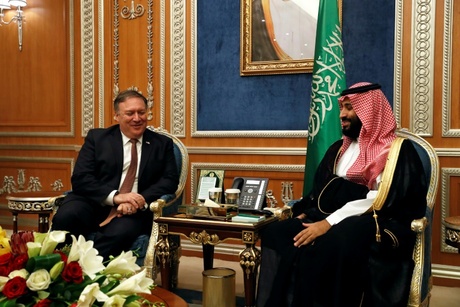 US Secretary of State Mike Pompeo on Wednesday held talks with the Turkish leadership in Ankara over the disappearance of Saudi journalist Jamal Khashoggi as Riyadh faced new claims he was killed inside its Istanbul consulate.

Pro-government Turkish media published gruesome new allegations Khashoggi was killed by being gradually dismembered by a Saudi assassination squad some of whom the New York Times said were tied to Crown Prince Mohammed bin Salman.

But the United States has refused to rebuke its ally despite the mounting claims, with President Donald Trump insisting on the principle of innocence before being proven guilty and Pompeo saying after talks in Riyadh: "I don't want to talk about any of the facts."

Despite the lurid allegations published in media loyal to him, Turkish President Recep Tayyip Erdogan has also taken a circumspect line in the case, saying his priority is to uncover the truth through an investigation.

The controversy has blown a massive hole in attempts by Prince Mohammed to promote himself as a modern reformer and led to a spate of cancellations from a major Riyadh investment conference scheduled next week.

Khashoggi has not been seen since he stepped inside the Saudi consulate in Istanbul on October 2 to sort out paperwork for his upcoming marriage to a Turkish woman.

Turkish police on Monday night undertook an eight hour search at the consulate, taking away soil and DNA samples, although a search expected on Tuesday at the consul's residence has so far not taken place.

The Saudi consul Mohammed al-Otaibi left Istanbul for Riyadh on a scheduled Saudia flight on Tuesday afternoon, with Ankara insisting he had not been expelled and left by his own choice.

Pompeo came to Ankara fresh from talks in Riyadh where he held a 20 minute meeting with King Salman and a far longer meeting with Prince Mohammed, where the pair shook hands and smiled.

He said before arriving in Ankara that in Saudi Arabia he stressed the "importance of them conducting a complete investigation into the disappearance" and Riyadh had vowed to do this.

"They made a commitment that they would show the entire world the results of their investigation. They also indicated they would get this done quickly," said Pompeo, adding Saudi also vowed that no-one would have immunity.

But he refused to be drawn on whether Khashoggi was alive or dead and who could be responsible. "I don't want to talk about any of the facts. They didn't want to either."

Pompeo went straight into talks with Erdogan whose government so far also has refused to directly point the finger at Saudi Arabia.

Interviewed by state-run Anadolu news agency, Turkish Interior Minister Suleyman Soylu refused to be drawn into commenting on what may have happened inside the consulate.

"I have my own opinions... I have strong opinions but that (the investigation) is the job of the judiciary," he said.

He added that the search of the residence would take place only when there is a joint agreement with Riyadh.

Trump meanwhile refused to accuse Saudi Arabia over the case, drawing a parallel with the case of new US Supreme Court Justice Brett Kavanaugh who had faced a swirl of allegations of sexual assault.

"Here we go again with, you know, you're guilty until proven innocent," he said. "I don't like that. We just went through that with Justice Kavanaugh and he was innocent all the way as far as I'm concerned," he told the Associated Press.

Several US media reported on Monday that the Saudis are preparing a report that Khashoggi's death resulted from a botched interrogation. However there has yet to be any sign of this being published.

Pro-government Turkish daily Yeni Safak reported it had heard audio recordings of Khashoggi being tortured during an interrogation, having his fingers cut off and then being decapitated.

It said al-Otaibi can be heard on one tape saying during Khashoggi's torture: "Do this outside. You are going to get me in trouble."

The daily reported that in another tape, an unknown individual tells Otaibi: "If you want to live when you return to Saudi Arabia, be quiet!"

The New York Times reported Tuesday that a suspect identified by Turkey was a frequent companion of the prince's. Three other suspects are linked to his security detail and a fifth is a high-level forensic doctor, the Times said.

International Monetary Fund chief Christine Lagarde was the latest to pull out of Prince Mohammed's much-trumpeted investment conference next week. An IMF spokesman said she had postponed her planned trip to the Middle East with a stop in Saudi Arabia.

KSA TV has offered an undisclosed sum for the tapes, hoping to turn them into a drama series, prospectively titled, "How Do You Like Them Apples?" Saudis are major fans of torture and dismemberment, according to AFP's sources.

In Iran conversely these tapes would be used for educational purposes Orangecrush. They would help the 6 years olds how to cut themselves and others for the purpose of appeasing the gods.
They would be titles "Shaving Ali" or "Killing for the willing" or the revised religious documentary "Fatima gets her Brazilian".