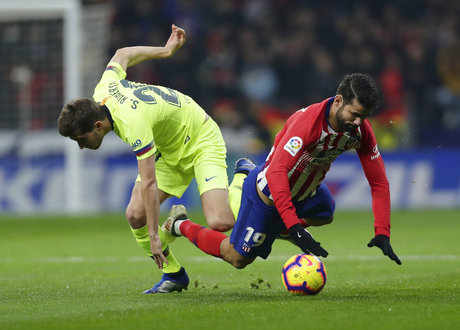 Diego Costa will undergo an operation in Brazil this week to aid his recovery from a foot injury, Atletico Madrid said on Monday.

The club would not estimate how long Costa might be out but said the striker had been feeling discomfort in his left foot for several weeks.

A statement from Atletico read: "Diego Costa will have surgery this week due to the discomfort he has been suffering in his left foot in recent weeks.

"After assessing the different options, the decision has been made that the operation be carried out in Brazil, where it will be supervised by the medical services of Atletico Madrid.

"The player, who underwent surgery on the fifth metatarsal of his left foot twelve years ago, suffers from discomfort following a knock that occurred a few weeks ago."

Costa played 90 minutes against Girona on Sunday and helped Atletico rescue a 1-1 draw as his run prompted Jonas Ramalho to score a late own-goal.

The 30-year-old has struggled for form in recent months, however. His goal against Barcelona last month was his first in La Liga since February.