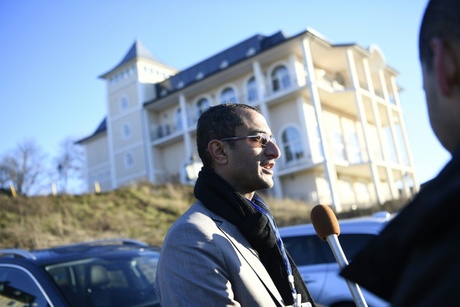 Talks between Yemen's government and rebels, locked in a devastating war for nearly four years, opened Thursday as tension remained high despite what the U.N. envoy called a "critical opportunity."

Yemen's government and rebels doubled down on their rival demands Thursday, just moments before hard-won consultations opened in Sweden under the auspices of the United Nations.

Yemeni Foreign Minister Khaled al-Yamani, who heads the Saudi-backed government's delegation to the U.N.-sponsored talks in Sweden, told AFP his team would follow through with a planned prisoner swap with the Huthi rebels -- but refused to compromise on the flashpoint port city of Hodeida, home to Yemen's most valuable port.

"The Huthi militias must withdraw from the city of Hodeida, and its port, and hand it over to the legitimate government, and specifically internal security forces," Yamani said.

A Saudi-backed military coalition has for months led an offensive to retake Hodeida, the last rebel stronghold on Yemen's Red Sea coast. The move has sparked fears for more than 150,000 civilians trapped in the city as even hospitals were seized by militants.

Hodeida is on the agenda at the talks, slated to run for one week. Not on the table are negotiations on a solution to the conflict between the Saudi-backed government of Abedrabbo Mansour Hadi and Yemen's Huthi rebels, according to U.N. envoy Martin Griffiths.

One of the most impoverished countries in the world, the Arabian Peninsula state of Yemen is now home to what the U.N. calls the world's worst humanitarian crisis, with 14 million people facing imminent mass starvation.

The talks in Rimbo, Sweden -- a picturesque village some 60 kilometers (35 miles) north of Stockholm -- have been months in the making, with the U.N. sending its special envoy to Sanaa to personally escort the rebel delegation to Sweden.

"During the coming days we will have a critical opportunity to give momentum to the peace process," Griffiths told reporters as the rival delegations gathered in Sweden.

"There is a way we can resolve the conflict," Griffiths said, adding that the Security Council was "united" in its support for a resolution to the conflict.

"Remember these are consultations. We are not yet beginning the process of negotiations."

The meeting marks the first attempt in two years to broker an end to the Yemen conflict, which has killed at least 10,000 people since Saudi Arabia and its allies joined the government's fight against the rebels in 2015.

Griffiths said the U.N. was willing to step in in Hodeida, an offer the Saudi-led coalition has rejected unless the rebels withdraw completely from Yemen's western coastline.

"The U.N. is willing if the parties so desire to play a part in the port and city. We'd like to take Hodeida out of the conflict because ... it's the humanitarian pipeline to the rest of the country," he said.

"We would like to see that airport open, but it needs to be assessed," he said. "We'd like to see progress on this."

The head of the Huthi rebels' political council threatened Thursday to bar U.N. planes from using the Yemeni capital's airport unless the peace negotiations lead to its full reopening.

Sanaa international airport, located in the rebel-held capital, has been largely shut down for years. It has been the target of air raids by the Saudi-led coalition, which also controls Yemeni airspace.

Sources on both sides said they would demand a ceasefire -- initiated by their rival -- and the opening of humanitarian corridors.

The government and Huthis on Tuesday said they agreed to a prisoner swap, to be overseen by the International Committee of the Red Cross, after the Sweden talks.

Saudi Arabia and its allies this week allowed the Huthis to evacuate 50 wounded rebels from Sanaa for medical treatment in Oman.

Griffiths' plans to host talks in Geneva in September collapsed on the opening day after the rebels refused to leave the Yemeni capital, saying they feared they would not be allowed to return.