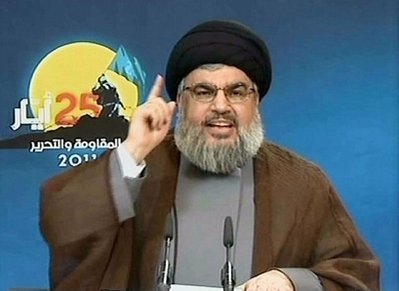 “The Zionist claims about the illness of Sayyed Hassan Nasrallah, Hizbullah’s secretary-general, and his suffering of a heart attack are the grand lie of the new year,” Hossein Amir Abdullahian, the international affairs adviser to the Iranian parliament speaker, tweeted.

“The day on which Nasrallah and the leaders of the Palestinian resistance will pray at the al-Aqsa Mosque will inevitably come,” he added.

Abdullahian remarks come after an Israeli journalist reposted a tweet by controversial Lebanese journalist Jerry Maher who lives outside Lebanon.

The tweet says “Hizbullah is refusing to transfer Nasrallah to Syria to receive treatment in Damascus at the hands of Russian doctors.”

“Iran has sent three doctors to Beirut, one of whom resides in Europe, to follow up on his health condition,” the tweet adds.

Unconfirmed reports had years ago claimed that Nasrallah was battling cancer, an allegation that has never been verified.

He is a lowlife iranian terrorist and it is only natural that Iran would report on his health and condition.

May Theresa he meant.

Every true Lebanese wishes he has both cancer and a fatal heart attack.

Oh NO Galaxy!! Certainly not!! I wish him a much more violent death than that! After all the death this guy has inflicted!! I wish him a long painful one...

A late Xmas present but what a present,

Remember that a few years back I once wrote that I’d dance naked on the table the day he goes to hell. That day is getting closer! Hehe

All he needs to do is to keep overeating...

Dudes look at him.. so pitiful.. it's sooooo saaaaaad.. poor poor little dying hassin.. he looks so worried.. that look of anguish his eye.. asks.. wadaya think guys.. is there even a small chance that.. I will end up up there??.. Sadly.. we all know the answer to his question.. I for one.. will be packing.. some charcoal briquettes.. to take with him.. where he's going.. call it a home coming present..

Living in the sewers for decades causes cancer. He does not lead a healthy lifestyle.

First they dismiss claims about his illness as "lies". Then they move on to serve the people an even bigger lie: “The day on which Nasrallah and the leaders of the Palestinian resistance will pray at the al-Aqsa Mosque will inevitably come.” LOL, he better hurry up then....

btw, he probably had that heart attack after learning about the latest israeli attack against Hezbollah weapon depots in Syria. Unable to do anything about it, of course that must hurt...

Hezbollah is destroying Lebanon and thousands of people's lives.

This group and its ideas are from Satan the devil.

Hezbollah will eventually be destroyed.

If you are a member of Hezbollah - get out NOW and save your life and soul.

If you don't get out NOW.... you can be sure at the moment of your last breath in this life, your eyes will open in the fire and horrors of Hell.

Seek the One True God with all your heart, He will answer.

Anyone who is a member of Hezbollah is NOT with GOD.

Hezbollah is Satan the devil.

Eventually Israel will be destroyed.

It's a done deal. He and I are just negotiating the time and place. All preparations are in order.

The sooner the better skeletor!

Skeletor will pass the bucket around for donations to bury him deeper than where he has lived for the past 30 years. He is a cancerous boil on the ass of humanity.
Kindly make sure you place him on your priority listing.....