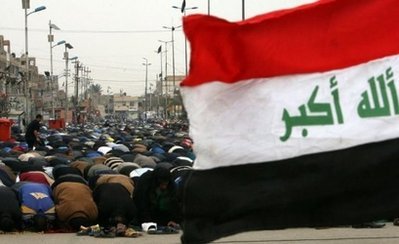 Iraq could bear the brunt if conflict intensifies between Iran and the United States, a think-tank study said Wednesday.

The International Crisis Group, which researches ways to prevent war, interviewed officials around the world including Iran for an extensive report on the state of the 2015 denuclearization accord between Tehran and major powers.

President Donald Trump has withdrawn the United States and ramped up economic pressure aimed at isolating Iran, although Europeans still back the accord negotiated under former president Barack Obama.

The International Crisis Group said that Iran would likely continue to comply with the deal, seeing itself as holding the moral high ground and capable of waiting out Trump, who faces re-election next year.

But the study said that Tehran's calculations could change if its oil exports, which stood at 3.8 million barrels a day in 2017, fall below 700,000, a level that could trigger hyper-inflation and intensify domestic protests which for now appear manageable.

If Iran decides to retaliate against the United States, the report said that Tehran may find its most attractive option to be to employ its proxies around the Middle East, a path that would be murky enough to avoid a strong European reaction.

The report quoted a senior Iranian national security official as saying that the likeliest theater was Iraq, where militias from the Shiite majority have close ties with Tehran.

"Iraq is where we have experience, plausible deniability and the requisite capability to hit the US below the threshold that would prompt a direct retaliation," the official was quoted as saying.

Iran is also deeply involved in Syria and Lebanon, but the two countries are especially fragile and Tehran could lose its gains, the official said.

Iran has limited assets in Afghanistan, while stepping up support for Huthi rebels in Yemen would hurt regional rival Saudi Arabia more than the United States, the official said.

The Wall Street Journal reported Sunday that Trump's hawkish national security adviser, John Bolton, asked for military options to strike Iran after an Iranian-linked group launched a mortar attack in Spetember on Baghdad's "Green Zone," the protected area where the US embassy is located. The US says its embassy was the target.

No one was hurt and demonstrators also ransacked the Iranian consulate in Basra during the wave of protests over economic conditions in Iraq.