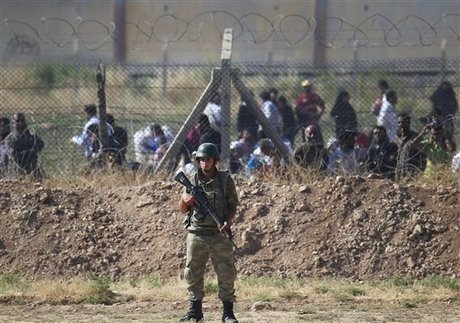 Since the start of the Syrian conflict, Turkey has pushed for the creation of a buffer zone on its border to protect refugees and prevent the emergence of an autonomous Kurdish region.

The "safe zone" or "security zone" would be on the Syrian side of the 900-kilometer (560-mile) Syria-Turkey frontier.

After receiving backing from U.S. President Donald Trump, President Recep Tayyip Erdogan said this week that Turkey would go ahead with the plan, prompting angry reactions from both the Kurds and Damascus.

Here is some background.

In November 2011, just months into Syria's devastating conflict, Turkey's foreign minister, Ahmet Davutoglu, said a buffer zone could be imposed on the border, with international backing, in case of a massive outflow of refugees.

The idea had already been proposed in the Turkish media as a means to protect civilians from a harsh crackdown by forces backing President Bashar al-Assad.

The Syrian National Council, the main opposition coalition, had also mooted a no-fly zone or secure area to protect civilians.

In July 2012, the Syrian army withdrew from certain parts of the country's north where Kurdish militants were deployed.

Erdogan accused Damascus of "allotting five provinces to the Kurds", posing a threat to Turkey, and threatened to respond by creating a border security zone.

Turkey sees Syria's main Kurdish force, the People's Protection Units (YPG) as a "terrorist" offshoot of the Kurdistan Worker's Party (PKK) which has for decades waged a deadly insurgency in Turkey.

But the YPG has been a key U.S. ally in the fight against the Islamic State (IS) group, leading a coalition that ousted the jihadists from key parts of northern Syria including Manbij, Raqa and the border town of Kobane.

In August 2012 Davutoglu urged the U.N. Security Council to set up civilian safe havens inside Syria, saying Ankara was struggling to cope with the thousands of people crossing into Turkey each day.

"The U.N. should initiate the establishment of IDP (internally displaced people) camps within Syria without delay. Needless to say these camps should have full protection," Davutoglu said.

Turkey's next foreign minister, Mevlut Cavusoglu, said in 2014 that a buffer area inside Syria was needed in order to defeat IS as well as for humanitarian reasons. But the proposal met with a guarded international response.

In 2015 Erdogan again called on world leaders to rally behind "a safe zone cleared of terror," implying it would be rid of both IS and Syrian Kurdish fighters.

In January 2017, incoming president Trump raised the idea of "safe zones in Syria for the people" in an interview with ABC News.

Turkey welcomed his shock December 2018 announcement that U.S. troops would be withdrawn from Syria, but the two NATO allies quickly fell into a row over future of U.S.-backed Kurdish forces.

Trump later proposed setting up a 30-kilometer safe zone along the border, but did not say who would create, enforce or pay for it, or where it would be located.

On January 14, Trump spoke to Erdogan, who later said he had reaffirmed that a 20-mile (30-kilometer) security zone along the Syrian border "will be set up by us."

It would be "controlled by Turkey," his spokesman added.

Syrian Kurds rejected the idea, Damascus denounced Ankara's "language of occupation and aggression", and regime backer Russia said the Syrian government must have full control of its north.