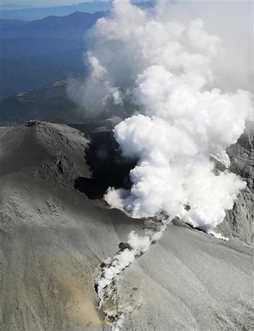 A Japanese volcano erupted on Thursday, spewing ash and smoke six kilometers into the air over a small southern island.

There were no reports of injuries or damage from the eruption on Kuchinoerabu, in the far south of Japan.

A local official said there had been no evacuations on the island, which is home to just 109 people.

Images broadcast by NHK showed large plumes of ash and grey smoke billowing above the island, which has regularly been affected by eruptions.

"We heard a huge explosion and there was shaking like an earthquake," a resident told the broadcaster.

The meteorological agency said the eruption occurred shortly after it had issued a new warning.

"There have been eruptions there since last year but we sent an alert out (this morning) for this latest eruption as it will have a wider impact," said Jun Fujimatsu, an official at the agency's volcanic activity division.

"We have maintained a level three warning, which means a ban on entering the volcano area," he told AFP.

"There are several craters at the volcano... The danger zone is two kilometers (1.2 miles) from the Shindake crater," he added.

"We do not think the latest eruption will engulf the entire island."

Government spokesman Yoshihide Suga said the plume of smoke and ash from the eruption rose 6,000 meters.

"But there is no impact on the community and no injury or damage has been reported," he told reporters.

There are currently "71 households comprising 109 people living on the island, including some who are just a few kilometers from the crater," local official Shogo Sado told AFP.

He confirmed no evacuations had yet been ordered but said preparations were being made in case it became necessary to move people, some of whom are elderly and frail.

In 2015, all 140 people living on the island were evacuated after a violent eruption that sent black clouds up as high as 9,000 meters (29,500 feet) and produced a five-minute volcanic quake.

Japan, with scores of active volcanoes, sits on the so-called Pacific "Ring of Fire", where a large proportion of the world's earthquakes and volcanic eruptions are recorded.

In January 2018, a Japanese soldier was killed and several other people injured after an eruption near a popular ski resort northwest of Tokyo.

Dozens of people were killed in the shock eruption, which occurred as the peak was packed with hikers out to see the region's spectacular autumn colors.