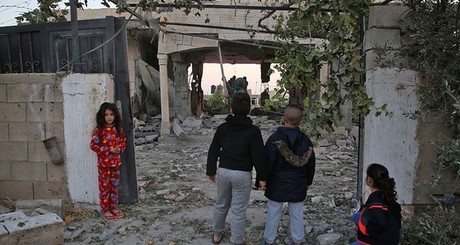 Israeli forces demolished the West Bank home on Friday of a Palestinian accused of the fatal September stabbing of an Israeli-American, witnesses told AFP.

Residents of the town of Yata, near the flashpoint city of Hebron, said that troops arrived at the home of Khalil Jabareen and were met by stone-throwing Palestinians.

There were no immediate reports of casualties on either side.

The Israeli army spokesman's office said it had no immediate comment.

Ari Fuld, 45, was a father of four who lived in the Israeli settlement of Efrat, near the shopping mall in the occupied West Bank where he was stabbed.

Jabareen, 17 at the time of the incident, was shot and moderately wounded near the scene after a brief chase and placed under arrest.

He was allegedly identified as the assailant from footage on security cameras outside the mall, at the Gush Etzion Junction south of Bethlehem.

There is regular friction between Israelis and Palestinians at the junction, which lies near a major Israeli settlement bloc and has been the site of numerous lone-wolf Palestinian attacks.

Fuld, was a right-wing activist who had appeared regularly on television.

Police have said there was no indication he was targeted for that reason, although they classified the stabbing as a "terrorist attack".

Israel has a policy of demolishing the homes of Palestinians accused of deadly attacks against Israelis, saying it acts as a deterrent.

Critics denounce it as a form of collective punishment that makes families homeless and can provoke further violence.

In 2005, Israel halted the policy but in 2014, Prime Minister Benjamin Netanyahu announced that demolitions would resume after a wave of attacks.