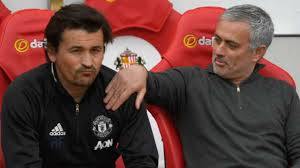 Rui Faria, an assistant to Jose Mourinho at a number of Europe's biggest teams, has become head coach at Qatari league side Al Duhail, the club announced on Friday.

It is the 43-year-old's first job since leaving Manchester United, as Mourinho's number two, last year.

Duhail said it made an agreement with Faria "to be the coach of the team in the upcoming period."

"The club will present its new coach to the media in a major press conference that will be announced in the upcoming two days," the club said on its website.

Faria has been assistant for Mourinho -- who is alo in Qatar at the moment working as a pundit for beIN Sports -- at a host of top clubs including Chelsea, Inter, Real Madrid and Manchester United spanning 17 years.

He surprisingly called time on their partnership last year at Old Trafford after working with Mourinho.

At the time he said he wanted to "spend much more quality time" with his family before taking a new job.

It is the second noticeable coach appointment made by a Qatari club in recent weeks, after former Iceland boss Heimir Hallgrimsson was unveiled as Al-Arabi's boss in December.

Duhail currently stand second in the Qatar Stars League, behind Al Sadd, who could be coached by Barcelona legend Xavi Hernandez from next season.

They are the current Qatari league champions and Faria will replace Nabil Maaloul, who was the coach of the Tunisian national side at the World Cup last year in Russia.