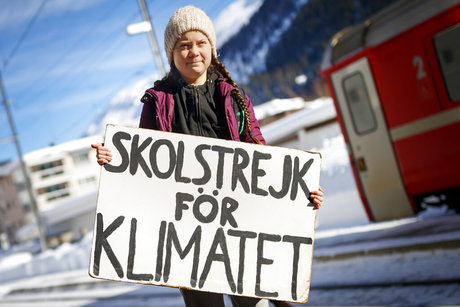 China's slowdown and Brexit took center-stage Wednesday at the Davos forum of the world's business elite, but the unlikely star was shaping up to be a Swedish teenager whose demands for climate action are inspiring schoolchildren across the world.

The annual World Economic Forum (WEF) is taking place this week in a global context of rising populism and concern for the catastrophic consequences of climate change.

Arriving by train -- rather than a more polluting plane -- to Davos on Wednesday was Greta Thunberg, the Swedish 16-year-old who has galvanized protests by high-schoolers in Europe, Japan and the United States demanding stronger government action to fight global warming.

Thunberg grabbed the headlines with a fiery speech before world leaders at last month's COP24 climate talks in Poland.

In a video message posted on Twitter, she looking poised to unleash a similar message in Davos with a call on "companies and decision-makers into real and bold climate action."

"I don't believe for one second that you will rise to that challenge, but I want to ask you all the same," she said.

U2 frontman Bono, a Davos regular, provided his usual dose of rock-n-roll rebellion to the forum's jet set.

"Capitalism is not immoral, it's amoral," the singer told a panel.

"It's a wild beast and if not tamed, it can chew up a lot of people along the way," he said.

Political top billing on the WEF stage was going to Chinese Vice President Wang Qishan, who is tasked with negotiating a truce in the U.S.-China trade war.

The annual conference in the Alpine ski resort was originally expected to see the two sides meet, but the White House canceled the U.S. delegation's trip due to the government shutdown in Washington.

Beyond the trade war, Davos-goers are also concerned about the economic slowdown in China.

Economic experts predict growth of about six percent in China for 2019, which is still relatively strong, but below the country's stellar rates of recent years.

Wang will be watched closely to see if Beijing has plans for stimulus or to liberalize the economy in order to restore ebbing investor confidence.

The clash between Beijing and Washington, which is again upsetting the markets, has dampened spirits at Davos, as signs grow of a broader slowdown in the world economy.

"This is really the end of happy globalization," said Pascal Cagni, ex-CEO of Apple Europe and head of the Business France lobby.

"We are finishing digesting the 2008 crisis and we realize that the global governance we need is not there," he said.

Europe also takes its turn at the WEF on Wednesday, with German Chancellor Angela Merkel making her traditional visit to the forum to promote the continent's leading economy.

However, Merkel comes to Davos weakened after being forced out of the leadership of her CDU party last year. She plans to leave office by 2020.

The Europeans as a whole come to Davos under the cloud of Brexit, with Britain's plan to divorce from the European Union blocked in parliament.

Prime Minister Theresa May pulled out of the conference to handle Brexit as did the EU's chief negotiator Michel Barnier, both eager to avoid a "no deal" exit on March 29.

Shrugging off announcements that Sony and Dyson are relocating premises abroad, Fox told AFP in Davos that "clearly the UK is open for business and is an attractive destination."

Japan's Prime Minister Shinzo Abe, after a recent trip to London to press May to secure a deal with Brussels, plugged his country's economic recovery in his first Davos visit in five years.

"May I now solemnly declare that defeatism about Japan is now defeated," Abe said in a speech.

The younger generation of European leadership will be represented by Spanish Prime Minister Pedro Sanchez, who was thrust unexpectedly to power in June after a parliamentary vote of no confidence in his predecessor.

Sanchez will meet with top executives from U.S. tech giants, including Sheryl Sandberg of Facebook, as Madrid looks to persuade movers and shakers that Spain as turned the corner since the eurozone debt crisis.