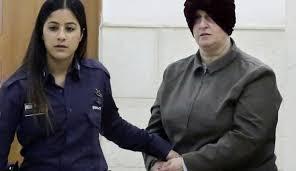 A Jerusalem court refused Monday to release to house arrest an ultra-Orthodox Israeli woman sought by Australia over accusations of sexually abusing girls under her care there.

District court justice Ram Winograd said that Malka Leifer would remain in detention for the duration of her extradition hearings, rejecting her lawyers' argument that treatment for her alleged mental condition in prison was "life threatening."

"The respondent is under the medical supervision of the prison, and undergoes weekly psychiatric evaluations," Winograd said at the end of the hearing.

"There is no room to assume that the treatment in the prison was risking her life."

Leifer's mental condition and her fitness to stand trial were at the heart of Monday's session, which drew increased attention after recent allegations that Deputy Health Minister Yaakov Litzman had used his authority to help prevent her extradition.

According to media reports beginning last week, Litzman, who is also ultra-Orthodox, had pressured medical officials to proclaim Leifer unfit to stand trial.

Litzman and a number of his aides were questioned by police, with his office denying any wrongdoing.

Leifer, who did not attend the Monday hearing, is accused of child sex abuse while she was a teacher and principal at an ultra-Orthodox Jewish school in Melbourne, where she had relocated from her native Israel.

According to Australian media, Leifer is facing 74 counts of child sex abuse, but her lawyer Tal Gabay told the court on Monday there were "three actual complaints."

After allegations surfaced against her in 2008, Leifer and her family left for Israel and have been living in the settlement of Emmanuel in the occupied West Bank.

A previous extradition attempt between 2014 and 2016 failed after Leifer was hospitalized in mental institutions and expert opinions determined she was not fit to stand trial.

But undercover private investigators filmed Leifer depositing a check at a bank and shopping, prompting Israeli authorities to launch a probe to see if she was faking mental illness to avoid extradition, leading to her arrest in February 2018.

Leifer's attorneys Yehuda Fried and Gabay rejected Winograd's proposal to have her undergo another psychiatric evaluation within the confines of her custody, saying that it would likely cause her duress that would further deteriorate her condition.

Dassi Erlich, one of the women accusing Leifer of sexually abusing her, said she was "hugely relieved" the court had refused the house arrest request.

Speaking to AFP from Australia ahead of the hearing, Erlich said she was "incredibly angry" over the possibility Litzman had intervened on behalf of Leifer.

Hearings on Leifer's extradition will resume in March.