Netanyahu Seeks to Save Face after Canceled Central Europe Summit 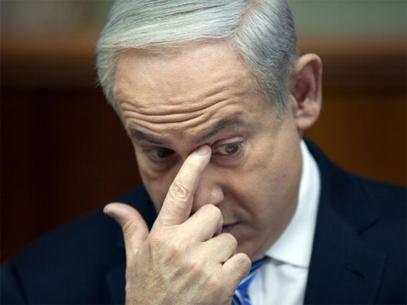 Israeli Prime Minister Benjamin Netanyahu sought to save face Tuesday after a summit with four central European nations was canceled over a Holocaust-linked dispute with Poland, instead holding meetings with the remaining three leaders.

The dispute put a dent in Netanyahu's attempts to forge deeper links with the four countries as part of his strategy to build alliances with nations providing strong backing to Israel within the European Union.

Netanyahu frequently lashes out at what he calls the EU's "hypocritical and hostile attitude," referring to the bloc's criticism of Israel's treatment of the Palestinians.

The holding of a summit of the Visegrad group -- Slovakia, Poland, Hungary and the Czech Republic -- in Jerusalem had been seen as a coup for Netanyahu's efforts.

But the highly sensitive question of Poles' role in the Holocaust loomed over it, having previously led to a diplomatic dispute with Israel.

The dispute was renewed last week, when Netanyahu was in Warsaw for a summit on the Middle East and was quoted as saying "the Poles collaborated with the Nazis," sparking Polish anger.

Netanyahu's office said later that he was misquoted and had not implicated all Poles or the Polish nation in the Holocaust, but Poland later downgraded its participation in the summit, saying it would send its foreign minister.

Israel's new foreign minister Israel Katz added fuel to the fire on Sunday, telling an Israeli television station "there were many Poles who collaborated with the Nazis."

Polish Prime Minister Mateusz Morawiecki called the comments "racist and unacceptable," while pulling his country out of the summit altogether, and on Tuesday senior Polish officials demanded Israel apologize.

The summit was postponed to the second half of the year at Poland's request, according to Slovakia.

Warsaw has long been at pains to state that Poland, which was occupied by Nazi Germany, did not collaborate in the Holocaust although individual Poles gave up Jews to the Nazis.

After the cancelled summit, Netanyahu was meeting the prime ministers of Slovakia, the Czech Republic and Hungary individually on Tuesday in Jerusalem before a joint lunch.

"There are many, many things that connect us and I have to tell you that we are cooperating in areas of security, defense, intelligence," Netanyahu told Slovak Prime Minister Peter Pellegrini.

The fresh controversy in Polish-Israeli ties comes after a row last year over a Polish law that made it illegal to accuse the Polish nation or state of complicity in Nazi German crimes.

After protests from Israel and the U.S., Poland amended the law to remove the possibility of fines or a prison sentence.

Netanyahu has faced criticism at home for agreeing to drop the issue after the amendments, including from Israel's Yad Vashem Holocaust memorial and research center.

Orban's visit to Israel in July provoked concern because of allegations he has stoked anti-Semitism in Hungary with nationalist rhetoric and a campaign against U.S. Jewish billionaire philanthropist George Soros.

But Netanyahu has highlighted the support Hungary has pledged for Israel, and both men have been at odds with the EU establishment.

When attending a Visegrad group summit in Hungary in 2017, Netanyahu's closed-door remarks denouncing EU demands of Israel as "absolutely crazy" were picked up by a microphone and heard by journalists.

Jonathan Rynhold, police science professor at Israel's Bar-Ilan University, said Netanyahu's strategy "is to work with the central and eastern countries, the Visegrad group, to neutralize pressures coming from other parts of the EU, particularly Brussels."

"I think he overrates what he is getting from it, and he underrates the cost in Jewish terms with being associated" with some of the countries, said Rynhold.