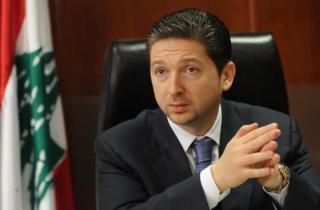 The National Dignity List led by MP Faisal Karami on Thursday criticized the Constitutional Council for not declaring the win of Taha Naji after invalidating the 2018 election of Dima Jamali in Tripoli's parliamentary elections.

In a statement recited by Karami, the list said the ruling “violated all constitutional and legal rules and the simplest standards of justice and fairness.”

Describing the decision to revoke Jamali's membership of parliament as correct, the list said the council erred when it declared the vacancy of Tripoli's fifth Sunni seat.

“It is our right to draw this council's attention to the fact that it does not have jurisdiction to come up with new explanations when the text -- which stipulates the win of the candidate who gets the highest fraction (in the proportional counting) of votes -- is clear,” the list added.

“Accordingly, the Constitutional Council's ruling in this regard is invalid and marred by essential flaws,” it said.

“The members of the Constitutional Council, who are among Lebanon's top judges, should have declared the win of the candidate who won the challenge instead of ordering by-elections,” the list went on to say.

“We renew our appeal against the Constitutional Council's ruling and call on it to abide by the legal text that is in line with logic and the constitution,” it urged.

And blaming the council for the constitutional “heresy,” the Karami-led list said “the biggest responsibility fall on the political authority,” which has “begun its work by the biggest corruption process that violates the constitution, the law and reason.”

Yes, elections are a scary thing to a non-entity such as Karameh. BTW Constitutional Council, whatever happened to Joumana Haddad's appeals? She was all but declared winner in "Beirut One" only to have it reversed when hundreds of votes magically materialized for the FPM candidate Antoine Bano. Does Bano get a free pass because he's part of the president's entourage and Haddad gets the bum's rush because she's independent, unlike the Syrian tool Karameh.

“Accordingly, the Constitutional Council's ruling in this regard is invalid and marred by essential flaws,” it said. Two things here Mr. Karami; What law in a country void of the most comprehensive laws? and what difference will it make if you have ten more MP's your town is one of the poorest and least safest in the nation? Enough of this power hunger that you all have start serving your country first and then worry about what musical chair game is ahead for your useless party.

Karami doesn't seem to understand that when the Constitutional Council annulled the votes of one polling station for irregularities it threw out all the votes in that polling station including the ones for Taha Naji.