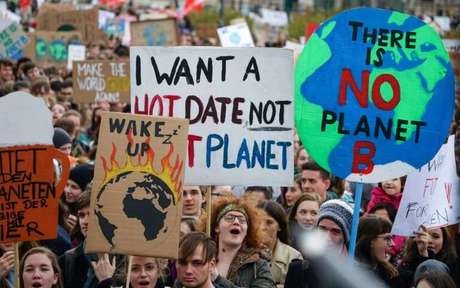 Tens of thousands of young people took part in the Paris edition of Friday's global student climate demonstration, according to the police and the rally's organizers.

The police estimated that around 29,000 people attended the peaceful demonstration -- one of the biggest around the world on Friday -- but Youth for Climate, the global movement behind the rallies, put the figure at 40,000.

The participants were mostly schoolchildren and college students, many of whom came with their parents and waved banners warning there is "No Planet B" or "No nature, no future".

The clamorous march traversed much of Paris's Left Bank, ending at the esplanade of Les Invalides, where crowds were continuing to gather an hour after the demonstration ended, according to an AFP journalist on the scene.

Climate strikes were scheduled to take place in more than 2,000 places in 123 countries on Friday, Greta Thunberg, the 16-year-old Swedish founder of Youth for Climate, wrote on Twitter.

Students also quit class to attend rallies in other French cities, including 12,000 in Lyon, 10,000 in Nantes and around 5,500 in Montpellier.

Even in the small southeastern town of Valence, around 1,000 people marched with signs asking "Mama, what were bees like?" -- a nod to the alarming decimation of hives in many countries.

Additional climate demonstrations are planned around France on Saturday.

On Thursday, four NGOs sued the French government for failing to uphold its commitments on fighting climate change, the latest in a series of high-profile cases that aim to force governments around the world into action.

Despite President Emmanuel Macron's promise to "make our planet great again," France's emissions in 2017 exceeded its commitments under the 2015 Paris climate treaty.

Over two million people have signed a petition backing the French lawsuit.