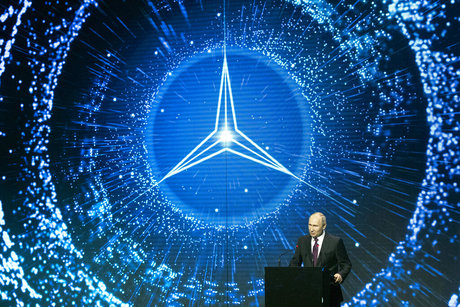 "We will support such projects in the future for sure," Putin said at an opening ceremony outside Moscow.

Germany's Daimler began construction of a Mercedes-Benz plant at an industrial park some 50 kilometers northwest of Moscow in 2017, investing more than 250 million euros ($280.8 million) in the factory.

The high-end Daimler brand, which also assembles commercial vehicles in Russia, will produce sedans and SUVs at the new plant.

The carmaker plans to produce 25,000 vehicles a year there and employ around 1,000 people.

"Mercedes cars will be popular with Russian consumers for sure," Putin said, adding that he has driven a Mercedes.

Altmaier, on his third visit to Russia since he became economy minister last year, said the factory is "proof that Russia and Germany can develop their cooperation."

"Of course we should resolve our political problems, we must make sure that conflicts end. But at the same time, we should develop economic relations," Altmaier said.

He added that a "prosperous Russia is in the interest of a prosperous Germany."

Following a period of growth and massive investment by global automotive makers, Russia's car market collapsed between 2013 and 2016.

Russia's economy has been whiplashed by international sanctions over Moscow's role in the Ukraine crisis as well as a crash in global oil prices.

However Mercedes-Benz, as with many other high-end brands, has weathered the Russian crisis.

German-Russian trade amounted to 61.9 billion euros (over $69.5 billion) in 2018, according to Berlin's economy ministry.

Germany is a major importer of Russian natural gas.